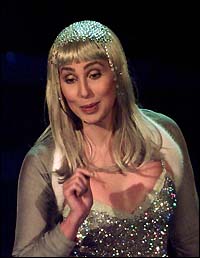 Cher, currently on her farewell concert tour, will have her November 6 and 7 shows at Miami's American Airlines Center broadcast as a two-hour TV special on NBC early next year.

"Cher's audience transcends the generations, and we look forward to re-visiting her many career highlights in so many entertainment arenas," says Jeff Gaspin, NBC's executive vice president for alternative series.

Titled "Living Proof," after the name of both the tour and her most recent album, the TV special will also feature highlights from her career.