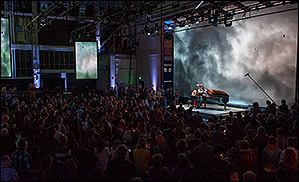 Soundbox is an effort by The San Francisco Symphony to revitalize interest in classical music in the face of dwindling ticket sales and rising age demographics in more traditional outlets.

Unlike more traditional classic music venues, the musicians perform in casual clothes, while the audience wears street clothes. Mobile device use is encouraged in the venue and information about the show is distributed via the club's smartphone app.

The club, which opened in December, staged nine sold out shows before going on hiatus to plan their 'second act.'

"Defying expectations of a standard concert experience is really what this space is all about," said Brent Assink, the symphony's executive director told the Associated Press. – Staff Writers