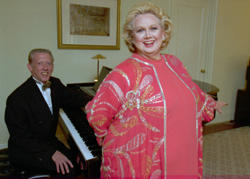 NEW YORK (AP) — Wally Harper, a pianist, musical director and composer who had accompanied singer Barbara Cook since her 1975 comeback concert at Carnegie Hall, died Friday in Manhattan. He was 63.

The cause was cardiac arrest, said his partner, Allan Gruet.

Harper began working on Broadway in 1969 with the short-lived musical "Billy," for which he wrote incidental music and was assistant conductor. He arranged dance music for a string of productions in the 1970s, including Stephen Sondheim's "Company" and revivals of "Irene" and "Peter Pan."

Harper was already a fan of Cook's when the two began preparing material for the singer's Carnegie Hall concert. She had largely retired from the stage since achieving fame in the 1950s and 1960s as the star of such Broadway as "The Music Man" and "She Loves Me."

Buoyed by the concert's critical success, the pair launched a 30-year partnership that would yield a series of cabaret recordings and concerts, including the recent Broadway shows "Mostly Sondheim" and "Barbara Cook's Broadway." Both shows played at Lincoln Center before touring the country.

"It's always a struggle to find material," Harper told The Associated Press in a 1996 interview. "It's not about the material just being good — it's about it being good AND right and appropriate. Sometimes it is about being what you need to fill a hole."

Harper was born in Akron, Ohio and studied at the New England Conservatory and the Juilliard School of Music.