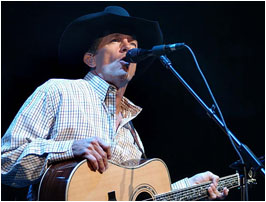 George Strait’s new MCA release, 50 Number Ones, has landed him in the #1 position on Billboard’s Top 200 and Top Country Albums charts, beating out Usher by over 7,000 units. With sales of 342,969 units this week, it marks the highest debut of Strait’s 22-year recording career. “I Hate Everything,” Strait’s current single and the only new song off his 2 CD set, jumps to #1 on Billboard’s Hot Country Singles and Tracks Chart this week, it becomes his 51st #1.

“This is the kind of problem you want to have,” said Strait. “Country radio has been great to me my whole career. I can’t thank those folks enough for making my album title a lie. It’s because of their support and the great fans that I’m lucky enough to be able to make music and celebrate this milestone in my career.”

“The success of this album is just another testimony to the continued vitality of an amazing career,” said Luke Lewis, co-chairman Universal Music Group Nashville. “It is an honor for all of us at Universal Music to be associated with an artist that exhibits such enduring talent.”

Ben Kline, Sr. VP sales and marketing UMG Nashville, called the record breaking first week of album sales, “A huge week that exceeded our biggest projections. These numbers certainly cement George's place as one of the most important artists in any genre of music." –by Jane Cohen and Bob Grossweiner

LOS ANGELES (AP) _ Nielsen SoundScan has a "Confession" _ Usher's album is not No. 1, though a counting error placed it in the top spot.

The music-sales tracking company had to correct the U.S. pop album chart Wednesday because of a reporting error from a mass music retailer.

Although Usher's "Confessions" was on top in the morning, the afternoon fix placed country veteran George Strait's greatest hits collection "50 Number Ones" in the top position.

In the morning, the company reported that Usher had sold 336,000 CDs and Strait had sold 331,000. When the retailer, who was not identified, called to report its mistake, Strait's numbers rose to 343,000, according to Anna Loynes, publicist for Nielsen SoundScan.

"Confessions" originally debuted in April in the top slot with sales of more than 1 million units and spent nine weeks at No. 1. The album was reissued with a bonus DVD, new tracks and artwork this week, which pushed it from No. 24 up to second place. Counting both versions, the album has sold 6 million copies.

Meanwhile, another error moved R.E.M.'s "Around the Sun" up one position to No. 13, with 61,000 sold, according to the music trade paper Billboard. SoundScan said that was Billboard's error, not its own.

Billboard representatives did not immediately return a call for comment.