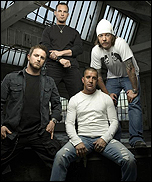 LOS ANGELES (CelebrityAccess MediaWire) — The original lineup for Creed have announced that they are getting back together and will be hitting the road for a late summer tour.

Originally forming in 1995, the band was founded by two high school friends, Scott Stapp and Mark Tremonti who recruited Brian Marshall and Scott Phillips. The band's 1997 debut album "My Own Prison" went on to sell more than six million copies in the U.S. alone. Their 1999 follow-up, "Human Clay" was certified Diamond for sales in excess of 11 million copies.

The band was the first act to have seven consecutive number one rock radio singles, four of which came off of the debut album and was voted Favorite Group in 2003 on the People’s Choice Awards and won numerous American Music Awards, Billboard Music Awards and others including the Grammy Award for best Rock Song in 2001 for "With Arms Wide Open." At the height of their popularity, the band broke up in 2004.

On reuniting, guitarist Mark Tremonti stated, "We're all very excited to reconnect with our fans and each other after six long years." Drummer Scott Phillips added, "Our career as Creed came to a very abrupt and unforeseen ending. After reflecting on some of the greatest personal and professional moments of our lives, we've come to realize that we are still very capable of continuing that career and our friendship on a grander scale than ever before."

Bassist Brian Marshall continues, "This is a development we are all happy about. It has been a long time since the four of us have taken the stage together, and without hesitation or reservation this is something all of us are in to. The anticipation to get back out there is electrifying. Singer Scott Stapp concluded, "Its amazing how life can change and bring you full circle. Time gave us all a chance to reflect, grow and gain a deeper appreciation of our friendships, artistic chemistry, passion for music, and sincere love for our fans! It's rare in life to get a second chance to make a first impression and we embrace the opportunity."

The tour is being promoted by Live Nation and Red Mountain/Blue Deuce Entertainment and will likely be hitting an arena or shed near you.