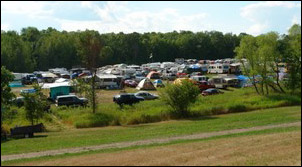 CADOTT, WI (CelebrityAccess MediaWire) — A tragedy at a musical festival in Wisconsin has prompted the family of the victim to call for a re-appraisal of safety provisions at outdoor musical festivals.

Tara Grant, 21, of Spring Valley died in her sleep on June 23rd while camping at Country Fest. Grant had been attending the music festival in Cadott, Wisconsin when she succumbed to carbon monoxide generated by an RV parked next to her campsite, KARE 11 News reported.

"We really fully believe campers and RVs should not be in the presence or parked near the tents," Lisa Grant, Tara's mother told KARE. The family is advocating for the festival site to move the recreational vehicles away from tent campgrounds.

Mike Asher, co-owner of Country Fest, where Tara died and the upcoming Rock Fest, to be held at the same location disagreed with he Grants. Citing 21 years without incident, Asher told KARE that I don't know that it would have made any difference. It's just a sad, rare incident."

The family has stated that its not after money but may consider further legal action of ameliorative actions to protect patrons from carbon monoxide are not pursued by festival organizers.