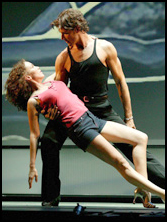 SYDNEY (CelebrityAccess MediaWire) — The storyline and music are familiar but the dialogue in German is new. Nearly 20 years after the film was released, Dirty Dancing is finding a whole new audience around the world, according to the New Zealand Herald.

The German stage production of Dirty Dancing had its European premiere in Hamburg this month and the papers proclaimed: "Jetzt wirds heiss" ("It's getting hotter").

The translation for Dirty Dancing in German is "unanstandig tanzen" which translated means shocking or indecent dancing.

So it's little wonder they stuck to the English title.

Also some of the film's most memorable lines received a Teutonic makeover.

"Nobody puts Baby in a corner" turns into a strange phrase in German. It was simplified to "mein baby gehort zu mir, ist das klar?" ("my Baby belongs to me, is that clear/understood?").

The songs remain familiar, as Hungry Eyes and Time of My Life are sung in English. But unusual interludes are tailored for the Germans like versions of lewd traditional German songs.

Hamburg is the first stop on the Dirty Dancing tour. Next up is the London West End production in October where advance sales are running at record highs.

The show will have its splashy US premiere in Las Vegas at the newly restored Aladdin Casino in 2007.

Not bad considering the film nearly didn't make it.

New York-born scriptwriter Eleanor Bergstein spent 10 years hawking her script around Hollywood. After being rejected by every major movie studio, it was finally made by small, independent Vestron Pictures on a shoestring budget of $US5 million with a cast of then relative unknowns, Patrick Swayze as the suave Johnny Castle and Jennifer Grey as wide-eyed Baby. "Even while we were making the film everyone kept telling us 'this is a terrible film'.

"The distributors didn't like it and the exhibitors didn't want to take it, so when it was first released it was only shown in a few cinemas, but people loved the film and kept coming back to see it a second and third time," Bergstein said.

The movie, which was inspired by her own experiences as a teen (she was called Baby until the age of 22), became an instant hit, particularly with teen girls who couldn't get enough of Swayze and his sexy dance moves.

It became the fifth-highest-grossing film of 1987 and earned $US170 million at the box office.

The film's soundtrack which includes the Oscar-winning theme, Time of My Life has sold more than 40 million copies.

Bergstein had many offers over the years to make a sequel or to take the story to the stage (she had nothing to do with the so-called promoted sequel, 2004's Dirty Dancing: Havana Nights). She resisted.

"I didn't want to disappoint the fans and give them something that was second-rate," said Bergstein who still receives hundreds of letters a week from fans from all over the world who have seen the movie countless times.

The stage production, she says, lives up to the film.

"It's not a conventional musical. No one wanted to see Baby or Johnny break out into song. Instead it's a play that uses music, the way it was used in the film," she says.

The current show is produced by Australian promoter Kevin Jacobsen who maintains the worldwide rights.

The $8.5 million production had its world premier in Sydney in Nov 2004. It could prove to be the most successful show to emanate from an Australian base.

"This potentially could be a bigger show than Mamma Mia or Cats," says Jacobsen, who is expecting the show to gross more than a billion dollars.

"Before opening night those shows had sold 100,000 tickets. For Dirty Dancing 300,000 tickets were sold," says Jacobsen. "We expect the show to run for at least three years here."

But the stage show is only the beginning of the Dirty Dancing onslaught.

Next up is Dirty Dancing: The Reality Series. It plans to be a mix between Dancing with the Stars and The Bachelor. Not only will a couple be cast for their dancing abilities but the female contestants will vie for the affection of the male dancer.

"The idea is to capture the feel of the original film.

"It's not just about finding good dancers, it's also about the romance and passion," says Sandra Stern of Lions Gate TV.

"We are not looking for models or gorgeous women. Like Jennifer Grey in the movie, we are looking for just normal girls."

The lucky winning couple will be cast in one of the world productions of Dirty Dancing.

"I think we could count this as a first for a reality show to be casting a stage production," says Stern.

Stern says they are not only capitalising on the sentimentality of Dirty Dancing but the timing could not be more perfect.

"There is such a renewed interest in the kind of dancing it portrays; couples dancing close together," she says. "You could say there is a zeitgeist about dancing at the moment."

Leading up to the 20th anniversary of the film's release in February, it is planned to re-release the original film in cinemas, as well as a producing a special edition of the DVD.

In light of its phenomenal success, movie studios and Broadway producers are already mining the vaults of other old films in the hope of turning them into stage successes.

Broadway has at least 15 films into musicals planned over the next couple of years, including a version of Adam Sandler's The Wedding Singer, John Cusack's cult film, High Fidelity, and a musical version of Doctor Zhivago.

There is even a chance that Sly Stallone's film Rocky could soon become a musical. Now that could really be a knockout.