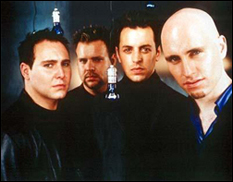 DiscLive, Inc., the live recording unit of Immediatek, Inc., will follow Vertical Horizon on their summer tour and provide limited edition, live discs from the band's shows starting with the July 19 performance at the House of Blues in Orlando, FL, and continuing through August and September.

According to Zach Bair, CEO and founder of Immediatek, DiscLive is expected to release live discs from approximately 19 shows on the tour, "We are very excited to be working with Vertical Horizon," he says. "This is a very talented, forward-thinking band who has consistently embraced innovative ways to connect with their fans. The DiscLive product is a natural fit." The consumer price of the collectible discs will be $20 if purchased before the show online at www.disclive.com, and $25 if purchased at the show or post concert.

Started by Keith Kane and Matt Scannell as undergrads while attending Georgetown University in 1991, Vertical Horizon showed steady progress while building a devoted following over the next several years. They were subsequently signed to RCA in 1997, and their major label debut "Everything You Want" was released in 1999. The record, which embraced an edgier, electric sound, yielded four singles, including the title track, "You're A God," "We Are," and "Best I Ever had." The album was certified double platinum.

Vertical Horizon recently released their follow-up record, "Go," on John Scher's Hybrid Recordings, and have already had a radio hit with their first single, "Forever."