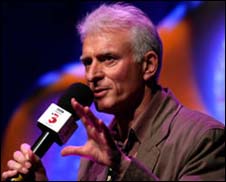 LONDON (AP) — Charlie Gillett, a DJ and music historian who helped bring music from around the world to wider attention, has died at the age of 68, his employer, the British Broadcasting Corp. said Thursday.

The BBC said Gillett died in a London hospital on Wednesday. He had an autoimmune disease and last week suffered a heart attack.

Soft-spoken Gillett was a fixture of the BBC's domestic radio stations and its international World Service, where his show "Charlie Gillett's World of Music" offered a wildly eclectic mix of music from around the globe.

In contrast to the narrow formats of most Western radio stations, Gillett played everything from Cajun boogie to Nigerian soul to Portuguese fado, gaining a devoted international following.

World Service director Peter Horrocks said Gillett was "an inspiration whose spirit of adventure and passion for the rich diversity of global music opened the ears of the world."

Many musicians had reason to be grateful to Gillett. Among the artists he championed were Senegal's Youssou N'Dour and Mali's Salif Keita, and he was credited with launching the career of Dire Straits by playing the then-unknown band's song "Sultans of Swing" on his BBC London radio show in 1976, prompting a battle to sign them by record companies.

Born in Morecambe, northwestern England, in 1942, Gillett studied at Cambridge University and at Columbia University in New York, where he wrote an MA thesis on the history of rock 'n' roll. He expanded it into the book "The Sound of the City," published in 1970 and regarded as one of the best accounts of the genre's early years.

In the 1970s Gillett co-founded the Oval record label, whose releases included the influential Cajun compilation "Another Saturday Night," and for a time managed pub-rock band Kilburn and the High Roads, whose lead singer, Ian Dury, went on to fame with The Blockheads.

Gillett is survived by wife Buffy and their children Suzy, Jody and Ivan. Funeral details were not immediately available.