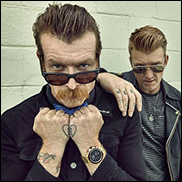 "Eagles of Death Metal has regrettably been forced to cancel the remainder of their European tour due to founder Jesse Hughes tearing a tendon in his finger," the band wrote in a since-deleted post on their Facebook page.

"Hughes has tried to play through the injury during the current tour, but doctors have advised that the only way to properly heal it is to stop playing now, or risk further injury and having to cancel several weeks' worth of shows," the statement continued.

"I'm devastated that we cannot continue what has been a life-changing return to Europe, but I need to get repaired so we can continue to play rock music around this beautiful world, including coming back to Europe even stronger in the summer," Hughes said in a statement.

The tour was itself a series of rescheduled dates following the tragic terror attacks that targeted an EODM concert at Paris' Bataclan Concert Hall in November. Despite Hughes' injury, the band still managed to perform at the Olympia in Paris on Feb. 16th.

At present, the band expects to pick up the tour's thread with a series of shows in South America, starting on March 9th at the Armando Music Hall in Bogota, Colombia.