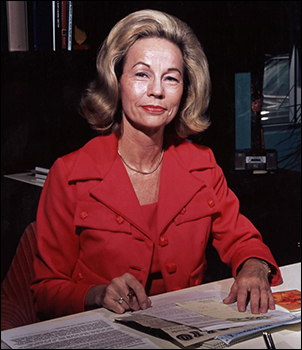 NASHVILLE (CelebrityAccess) — Jo Walker-Meador, who rose from an executive assistant to Executive Director at the Country Music Association died Tuesday night in Nashville following a stroke. She was 93.

“Jo was a champion for Country Music around the world and a groundbreaker for women in the entertainment business,” said CMA Chief Executive Officer Sarah Trahern. “On a personal note, I will miss her guidance, humor, and friendship. She was the first meeting I setup before I took this job. She taught me lessons in how to gracefully navigate the Board. She was always diplomatic in her storytelling and she had some great ones to share. Over the last six months she was a little more candid and I always looked forward to our time together. She will be greatly missed by all. My heart is broken.”

Born Edith Josephine Denning, Jo Walker-Meador was one of 10 children raised on a farm near Orlinda, Tennessee. She attended Lambuth College in Jackson, Tennessee, for two years, before transferring to the George Peabody College for Teachers in Nashville.

While she had aspirations to teach, she worked in a number of secretarial roles, before landing a job as the office manager and the first paid employee of the newly-formed CMA in 1958.

By her own admission, she was not well versed in country music but proved to be a quick study and when Harry Stone retired as Executive Director of the CMA in 1962, she was promoted to take his place.

“She was very good at being able to get input from a lot of people and use it,” said former CMA Chairman and President J. William Denny. “Dealing with a big board is a special skill, there’s no doubt about it, because you have a lot of bosses. Jo had the ability to put all of their strength to CMA’s advantage. I wouldn’t say the organization was built around her, but in effect I suppose it was.”

“Jo did everything from organizing Board meetings to making coffee for them,” added Ed Benson, who served as Executive Director of the Association from 1992 through 2005. “She was this marvelous hybrid of a secretary and a support assistant while also evolving the organization.”

“She is known all over the world,” said Tom Collins, CMA Board Chairman in 1979 and 1980. “We’ve traveled with her in Europe, and people I never even heard of would want to come up and see her. This is why the CMA Jo Walker-Meador International Award is named after her.”

Walker-Meador retired in 1991, but not before accumulating an impressive set of accolades. These included Nashville's Metronome Award, election to the Board of Governors of the Nashville Area Chamber of Commerce, the Academy of Country Music’s Jim Reeves Memorial Award in recognition of her role in establishing CMA’s London office and ongoing dedication to Country Musi,) and election as the first female President of the Board of Big Brothers.

She is survived by her brother Pete Denning, daughter Michelle Walker, and step-children Rob and Karen Meador.