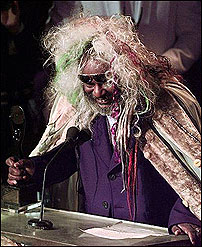 The 61-year-old singer, best known for his work with Funkadelic and Parliament, hired Cochran's firm in 1997 to represent him in a legal battle with the publishing company, Bridgeport Music Inc. The company claimed ownership of Clinton's catalog of music, the lawsuit contends.

Clinton alleges that one of Cochran's employees, Donald Wilson Jr., failed to defend his interests competently. He claims Wilson did not effectively cross-examine witnesses and lied about the potential for witnesses to support his case.

As a result, Clinton claims he lost the copyright to his own music.