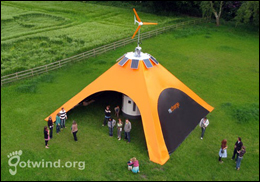 LONDON (CelebrityAccess MediaWire) — Orange is using the power of wind to give festival goers another option for keeping their phone battery topped up. Orange announced the launch of a freestanding wind powered mobile phone charging station, giving Glastonbury revellers no excuse not to keep in touch with their friends, relay their favorite stories from the Festival and of course ask the inevitable question “where are you?”.

Working with renewable energy experts Gotwind, the recharge Pod is an evolution of the Orange portable wind charger, tested at 2007’s Glastonbury Festival. The recharge Pod will act as a trial in using renewable energy sources on a larger scale, with a view to ultimately powering elements of the Chill n’ Charge tent at future Glastonbury Festivals.

Glastonbury Festival spokesperson comments “Glastonbury Festival prides itself on being the first festival to host alternative solutions to environmental concerns – the Orange recharge Pod is a great initiative that supports Love the Farm, Leave No Trace and encourages people to open their eyes to the many practical uses of renewable energy.”

Hattie Magee, Head of Partnerships at Orange UK, said “Orange is proud to have been the official communications partner of Glastonbury Festival for over 10 years. It is more important than ever that we continue to innovate and demonstrate how mobile technology can help bring people together and make festival life a little bit easier, whilst in-keeping with the traditions of the Glastonbury Festival. Mobiles phones are essential tool for festival survival and with an expected capacity of over 175,000 people spread across a sprawling 900 acres of farmland, keeping in touch with mates around the site, especially when you are covered head to toe in mud, is made that much easier if your phone has battery power!”

The recharge Pod will be stationed within the Pennard Hill camping grounds at Glastonbury and will be a free service allowing all festival goers to charge their mobile phones throughout the weekend. –by CelebrityAccess Staff Writers