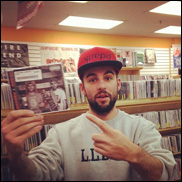 PORTLAND, Maine (Hypebot) – Spose, an indie rapper from Portland, had a brief major label experience that did not end well. Except that it did. By that I mean, he saw that the major labels weren't for him, got dropped and then turned their publicity for what they thought would be a easily manipulated act into a way of reaching core fans. Now he's earning a solid living without having to give up almost everything about hip hop that he loves.

Spose recently posted about his major label experience and how that enables him to now earn a decent living as an indie artist. While we see many legacy artists basically doing the same thing, emerging artists that get dropped from major labels often have difficulty recovering. Spose sure didn't.

Some of the details are a bit sketchy but here are key highlights:

It Began With Local Radio

"My song blew up on the radio first. ‘I’m Awesome’ got played at my local alt. rock station, which was that station I grew up on. It quickly became the most requested song there, and then jumped to the local pop station."

And Selling Tracks on iTunes

"The way the world works now if you’re blowing up on the radio you’re killing in iTunes too."

Regional iTunes Sales Noticed by A&R [or an intern]

"So this intern looks at the Portland sales and sees that I’m the #1 tune. I doubt I cracked the top 200 nationwide, but that was enough to get their attention."

Getting That Signing Bonus

Discovering He's There To Be Productized

"I thought universal wanted me, my style and my music. But they just wanted to take my name, my sorta-notoriety from one hit, and plug ‘Spose’ into a bunch of pop songs."

Becoming a One Hit Wonder

"My first big video ‘I’m Awesome’ got something like ten million views. When the single released on iTunes 850,000 people actually paid to download it."

After Being Released from Universal

"I released the songs Universal hadn’t wanted in a free album called Yard Sale, and used that to advertise my Kickstarter. It brought in $28,000. And now that I have that small, loyal fan base I’m able to keep releasing music that’s uncompromised."

"I’ve made as much money in the last 3 years as Universal ever gave me."

Turn Their Blockbuster Machinery To Your Advantage

While others drop into a drunken stupor cause "Daddy [aka Big Record Label] didn't like my music and cut off my allowance," Spose built his own empire.

And enough of those fans BUY his music that he's doing just fine.

Hat tip to Techdirt for the alert.