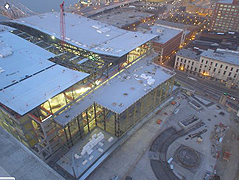 LOUISVILLE, KY (CelebrityAccess MediaWire) — The new $238 million, 22,000-seat arena Louisville Arena is on track for its November 1st opening and officials are hard at work seeking a naming rights partner for the venue.

According to the Courier-Journal, more than 90% of the suites at the new venue have been leased and numerous smaller sponsorship deals have been struck, taking some of the pressure off of the Louisville Arena Authority to secure a naming rights sponsor at the venue. Arena Authority Chairman Jim Host told the Courier-Journal that he estimates that there is a '50-50 chance' that the area will secure a naming-rights partner before it officially debuts.

"[It] has to be the right name. It has to be something that everybody will immediately get and understand,” Host told the Courier-Journal, “And so, in the meantime, we'll call it the Louisville arena, because we're doing just fine."

Host said that seven companies had made bids for a naming rights deal but declined to identify them with the exception of Toronto-based Sun Life Financial, which also sponsors the Miami Dolphins stadium.

Target prices for a naming rights deal have not been officially disclosed, but the Arena Authority estimates that $4.3 million from sponsorship packages is needed to pay down construction-related debt in 2011. – CelebrityAccess Staff Writers