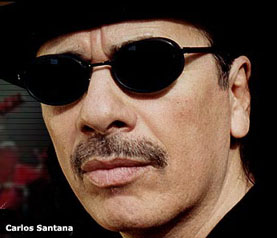 According to MTV News Carlos Santana and his namesake band have been writing songs and laying down tracks for a new album expected sometime next year, a spokesperson said Wednesday.

Still in its early stages, the disc will follow up the smash Supernatural (1999), which featured a host of collaborators ranging from Eric Clapton to Lauryn Hill. The disc won nine Grammys and scored hits with "Maria Maria" and "Smooth."

Half of the new disc will be produced by J Records chief Clive Davis, who helped mastermind Supernatural and who first signed Santana to Columbia three decades ago. The band has been recording in San Rafael and Berkeley, California.

"The only thing I don't wanna do is repeat myself," Santana said in April. "I don't want to compete with it or repeat or duplicate or anything like that. … I pretty much trust that, just like Supernatural was made, the next one will be made — stick your finger up in the air and [go with the wind]."

While the band has been on hiatus since last October, Santana recently spent time in the studio with Michael Jackson, ostensibly for Jackson's upcoming Invincible (October 30), and sat in with blues legends B.B. King and Buddy Guy at a San Francisco Bay Area tour stop in August.