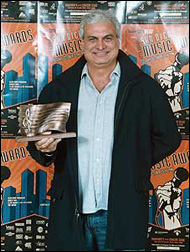 LOS ANGELES (CelebrityAccess MediaWire) — Bill Silva announced today that Michael K. Walker, Kurt Willms and Matthew Cohen are new additions to the Silva Companies to help in the acquisition of new business opportunities and keep up with the new projects the companies have undertaken in the past six months. Aya Taguchi gets promoted to Manager.

Michael K. Walker has joined the company as the head of Business and Legal Affairs for all three corporate entities – Silva Touring, Inc. d/b/a Bill Silva Presents, Bill Silva Management, and Silva’s interest in the Hollywood Bowl via Andy & Bill Concerts LLC. Walker is an entertainment attorney with degrees in Economics and Accounting. He was the Senior Director of Business and Legal Affairs at Activision, the second-largest video-game publisher in the United States. Before that he was partner at GraphicCorp, a software company he helped build, manage, and successfully sell to Corel Corporation in 1999. For the past two years, he has consulted for a variety of entertainment companies in the United States, Australia, and New Zealand.

Kurt Willms and Matthew Cohen are Managing Partners of the Nashville based management/promotions company Green Room Productions, and will be closing Green Room to join Silva’s group in Los Angeles. Green Room and Silva have had a successful relationship co-managing Octone Records’ Dropping Daylight.

Cohen will continue to assist in the day to day management of Dropping Daylight but will work under Silva’s touring and promotion businesses to help develop touring projects, buy talent, and to acquire tours and venue booking agreements. He previously worked for Universal Concerts (now House of Blues Concerts) at the Hi-Fi Buys/Lakewood Amphitheater in Atlanta, Ga and booked concerts and events for Georgia Tech.

Aya Taguchi will handle day to day management duties for Jason Mraz. She had worked for a year as Executive Assistant to Silva and six years prior with booking agent Marsha Vlasic’s MVO Ltd.

Bill Silva Presents currently books venues in Southern California, Las Vegas and Arizona including the Hollywood Bowl and Mandalay Bay. The company has promoted over 10,000 shows throughout the world in its 25 year history.

Silva Touring has started putting Margaret Cho’s 2005 “Assassin” tour on sale around America after a successful five-week off-West End run of London in November/December of 2004. The company organizes and promotes national tours such as “Up In Smoke,” featuring Dr. Dre and Eminem, and most recently, Margaret Cho’s “Notorious C.H.O.”, “Revolution” and "State Of Emergency" tours.