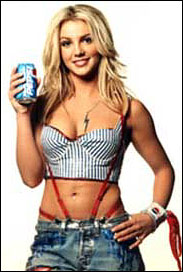 Even though Britney Spears reportedly signed a $97+ million deal with Pepsi, World Entertainment News Network reports that she has been seen once again drinking a rival Coca Cola product. Last week she left a recording studio with a Sunkist in her hand, and last month she drank a Coke in Sydney, Australia.

"You don't expect to sign someone to a deal that big and then see them drinking a competitor's brand twice in a month," a spokesperson for Pepsi said.

"Words were said to her in the strongest possible terms last month – and I am sure more will be said now. It will be made clear to her she should drink only Pepsi."