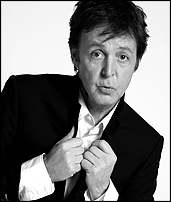 I thought Starbucks was supposed to be a whole new paradigm, a whole new way to expose and sell music. An alternative to the big box retailers that don’t give a shit about discs. But that was before Joni Mitchell’s album tanked and their new artist series didn’t have any impact. Now they’re just like everybody else in the music business. DESPERATE!

How about EMI. Selling Spice Girls CDs exclusively at Victoria’s Secret. Yup, come buy the CD and learn how to be a ‘ho! Bring your ten year old in and teach her how to trade on her sexuality. God, are the seventies dead. Adolescents back then used to look up to Gloria Steinem, an educated woman who just happened to be pretty. Now they admire Victoria Beckham, who not only isn’t as good-looking, has baseball-sized tits bolted on to her chest and eats so little she can’t say something intelligent because she’s not able to cogitate. And EMI is no different from today’s kids, they did this deal for the CASH! Victoria’s Secret purchased the albums ONE WAY! You can’t leave that money on the table, even though there isn’t a Victoria’s Secret in every neighborhood. Fuck the fan. That’s the music business mantra.

Now let me get this straight. If you bought "Memory Almost Full" the FIRST time around, you’re not a fan? If you bought it the week it came out because you love McCartney, you’re a less desirable customer than the geek who waits half a year to buy the more desirable product? Or is this like the iPhone, early adopters get fucked! Shouldn’t Starbucks refund $3 to everyone who bought the first version, to quiet the uproar?

There is no uproar. Because the record industry already fought that war and lost. The labels were armed with overpriced CDs with only one good track. And then, if you didn’t buy them, they threatened to sue you. The bonus material on "Memory Almost Full"… Why NOT steal it? You almost feel ENTITLED to steal it. The same way a woman who catches her husband in bed with another woman is entitled to throw his clothes on the street and key his truck. Drive people insane and there’s no LIMIT to what they’ll do.

Really, we knew Sony couldn’t be trusted. But STARBUCKS? The operation with thousands of little mom & pop shops run by nice twentysomethings happy with their good jobs? Oops, corporate-owned stores employing adults for little money? They’ve got such a friendly face, why are they fucking me in the ass?

Not that it’s Starbucks’ fault. Or is it? Who is responsible for releasing the same damn album with three bonus tracks and a live DVD for Christmas? How blatant. If the material was that fucking good, would they release it after the first of the year? Doesn’t McCartney see this pisses off fans? Or maybe Starbucks really is behind this. They want some of their MONEY BACK!

This is the kind of shenanigan that got this industry in the pickle it finds itself today. Sell the DVD as a standalone item. Give an EP with the bonus tracks free to everybody who shows up at Starbucks with the original album. (People probably buying a latte in the process.) Allow them to log on to iTunes and get this bonus material free. The technology’s there, customers were allowed to upgrade their EMI tracks to iTunes Plus.

That would be a story. How Starbucks broke the mold, respected the customer. But no, the company treats coffee with more respect than music. Everybody disrespects music. And you wonder why the consumer wants it for free.