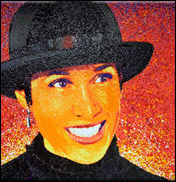 That's what they don't tell you about so many of your heroes, the rock stars of yore, their hold on reality is very tenuous. I'm not saying that Shocked should be forgiven, that her comments were either valid or the right thing to say, but you must look at them through the prism of the person. And that person is…someone I found it impossible to connect with in my one sit-down meeting with her at a boba shop on Western Avenue about a decade ago.

Psychiatrists call it "tracking." Can someone tell a story and stay on point. Can you have a dialog that is linear. I'm not saying that everyone has to agree with me, but when we can't communicate, that's an issue. And I found that the most basic of discussions was difficult with Ms. Shocked.

Now I'm not a doctor. And let's dismiss the online reference to Ms. Shocked's mother committing her to a mental hospital. Let's just say there's background here, just like there is in the banking crisis in Cyprus. What appears one way on the surface might be completely different when you investigate the underlying facts, like Cyprus banks were a haven for the money of Russian oligarchs, who received a return there that was impossible to find in the United States, never mind other financially-challenged nations.

We think these artists are two-dimensional. We want them to open wounds and reveal all, but we want to treat them like cardboard cut-outs, without feelings, without dimensions. Actually, I'll posit the greater the artist, the looser their grip on reality. There's no more talented artist than Joni Mitchell, but conversation with her is extremely difficult. It's hard to get to the meat of the matter for Joni challenging and interrupting your premise, however irrelevant.

Not that I speak with Joni all the time. But I've had a few interactions. Not that she's crazy, but I will say she's difficult. Then again, she made the best self-confessional music of all time. Furthermore, she can play and sing and write. Do you think a normal person can do this?

A normal person plays it close to the vest, is manipulative, whereas an artist is out there completely, warts and all. Artists need representation because they can't fathom the manipulation of business, they need protection.

And so does Michelle Shocked.

At this point in her career, the handlers have evaporated. It's just her against the world. Whatever she's doing to keep herself together, even if it's religion, is fine by me. It's a hard life, you do what you can to get through.

As for her comments… Inexcusable.

But she deserves another chance.