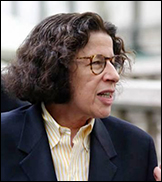 Maybe she missed her chance. She was hyped heavily back in the cottage industry days, before the internet, when she was writing books and everybody could be made aware of your efforts, assuming you could make it through the gauntlet.

But today there is no gauntlet, only a maelstrom. Gatekeepers are history. If someone tells you they can make you a star, that they have the power to decide careers, ignore them, they're a self-righteous blowhard. But if someone tells you they'll work with you to raise attention, to capitalize on your efforts, to band together your core audience and satiate it and make it grow, then you should listen.

It does come down to the work. That's what nobody wants to admit in the social media era, just because you've got scores, MILLIONS of followers on Twitter or Instagram, that does not mean you're creating something of substance that will sustain. We're in the era of the drive-by, something is cool for five minutes and then it's forgotten, heard about Tila Tequila recently? Ignore all the noise over the nobodies. It's temporary. It's made to divert you from the real issues, like you're broke and your future is compromised.

"The worst thing about this is that there’s always outrage over people in show business, who have no actual power. They’re entertainers. We would prefer that they agree with us, and do the right thing. But moral outrage should be reserved for Congress or the Supreme Court. To me, the fact that people can’t tell the difference between these things is why we have Donald Trump as president. People want to be entertained 24 hours a day. And they’re seeking from entertainment what they should be seeking from other branches of life."

Bingo! That's Lebowitz in Sunday's "New York Times." They always do these conversations in the Style section that are worthless, but this one between Fran and Bill Maher broke the mold.

Not that Maher didn't get in a few shots…

"Pointing your finger at other people and saying, 'You’re insufficiently liberal.' In a lot of ways, the Democratic Party went from protecting people to protecting feelings. Did you see the story about Sean Spicer, that stroke victim waiting to happen? He wasn’t on camera one day, and a reporter asked Steve Bannon about it. And Bannon said, 'Sean got fatter.' Now, I’m not a big fan of Steve Bannon, and that’s not the funniest joke I ever heard, but it was a joke. And Chelsea Clinton tweeted: 'I never find fat-shaming funny, ever.' And I thought, 'This is why you guys lost.'"

Bullseye! I employed the term "libtard" and my inbox went berserk with people annoyed and disgusted, not knowing it was a joke, that it was about taking back the word from the right, kinda like African-Americans took back the N-word. Yup, "libtard" and "snowflake," that's how you defuse an argument, by owning the epithet and playing it back to the haters, but the left wing has no sense of humor, which might be why Lebowitz is buried.

She didn't go to college, doesn't that qualify her as an expert in Trump's America?

Lebowitz takes a stab at trigger warnings, refuses to get excited about the names of buildings at Princeton, she cries foul on the Democratic tropes, the inane code of beliefs if you veer from you're excommunicated.

And Fran goes on and on, her quips are genius, and her statements have substance:

"Remember that whole period when Charlie Sheen was news. That’s not news, O.K.? You can watch Bill; you cannot watch Bill. But you can’t not have this Congress. That’s the misplaced moral outrage."

"Every time I see the sentence 'Paul Ryan is the conscience of the Republican Party,' I think: What is that? Is that like being the quarterback of the New York City Ballet? But yes, that is where your outrage should be."

She says Trump's "not even taken seriously by other real estate developers, who aren’t exactly theoretical physicists."

And then comes the piece-de-resistance:

"I am so tired of hearing about what the Trump voters want. I don’t care what they want. How’s that? And you know what? We do know what they want. They want a Confederate flag. We all know what this is about. I’m tired of hearing people, particularly men, explain to me what Hillary Clinton did wrong. Donald Trump didn’t win because he did something right; he won because he did something wrong. We always knew you could win that way – appealing to the worst. You’re just not supposed to win the presidency that way."

Don't email me if you disagree, that's not the point, the point is Fran's speaking her truth, she's not backing down, she's confident in her position and she's FUNNY!

Kinda like Ann Coulter if you think about it. The best part of her appearances is when she snickers and laughs at herself when called on her b.s.

But the right wing media makes Coulter a humongous star…

And the left wing media is so fearful of offending someone, so disorganized that it leaves Lebowitz on the sidelines.

This is how it's gonna be folks. We are now in charge, we've got the power, we decide who wins, what's right and wrong. As proven by the election of Trump. Each and every media outlet called the election wrong, except for a "Los Angeles Times" poll they now say is flawed. If you're depending on the so-called gatekeepers to tell you where we're going, what's important, you're not only delusional, you're gonna be left behind. I'm not saying the news is fake, but it requires analysis, and today it must be more than just the facts, it must be part of a cohesive vision. Which is why Fox News is so successful. The old fart media just thinks if it prints what's going on the public will wake up and do the right thing. But, as Lebowitz says, the public wants entertainment, they don't want to do the hard work.

So we need a realignment, of who we're listening to. That's the story of Bernie Sanders, the millennials whose future is in front of them and is flawed, embraced him. The powers-that-be made sure he couldn't win, invested in the past, not the present.

It's a brave new world. And you're gonna decide where it's going.

And we need leaders. People who speak their truth, who sometimes get it wrong.

But if we have a litmus test for everyone who rises above, if there are no priorities and all issues are equal and no one can be offended…