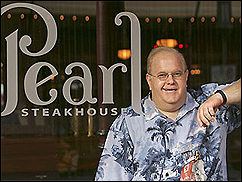 ORLANDO, FL (CelebrityAccess MediaWire) — The man behind Britney Spears’, the Backstreet Boys’ and ‘NSync’s success is still running from his problems, avoiding paying the penalty for his classic pyramid scheme that bilked more than 1,400 people out of hundreds of millions of dollars.

Pearlman’s offices were raided by the FBI in February, and his assets have been placed in receivership.

Pearlman, a New York native who moved to Orlando in 1990, conjured multi-platinum success by piecing together boy bands in the 90s. He claims to have made nearly $2 billion in retail music sales, and also owns a restaurant franchise, a new steakhouse and a dining and entertainment complex in downtown Orlando.

According to a report by ABCNews.com, Pearlman swindled people out of $317 million, and got about $150 million from banks.

The money allowed Pearlman to lead a lavish lifestyle, including owning a Rolls Royce Phantom, a Gulfstream private jet and a 15,000-square-foot Florida mansion.

State and federal investigators, as well as lawyers for the alleged victims, say Pearlman and his associates sold investors, many of them senior citizens, phony securities which he called an “employee investment savings account” through his company Trans Continental Airlines Inc.

ABCNews.com reports that Trans Continental assured investors that their money was insured both through the Federal Deposit Insurance Corp. and the well-known insurance brokers AIG and Lloyd’s of London.

The Florida Office of Financial Regulation, which initiated the investigation, has been unable to contact Pearlman since he left the United States in January 2007.

On February 1st, he sat in a theater in Berlin and watched his latest boy band, the German sensation US5, receive a Goldene Kamera Pop International Band award, and has not been heard from since. –by CelebrityAccess Staff Writers