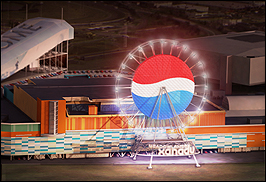 MEADOWLANDS (CelebrityAccess MediaWire) — The developers of the under-construction $2 billion dollar Xanadu entertainment complex in the Meadowlands have recently announced plans to build the world's largest ferris wheel and that Pepsico is going to shell out some major moulah to secure the naming rights.

According to the Globe, 287-foot-high Ferris wheel, to be known as the Pepsi Globe will be festooned with a huge Pepsi logo and be called the "Pepsi Globe." The 10 year deal is going to cost the soft drink company a cool 100 million dollars. Pepsi will use the wheel as part of a major promotional effort with numerous tie-ins that will see the distribution of 450 million cans of cola emblazoned with an image of the wheel.

"The Pepsi Globe is an iconic symbol that is reflective of our brand’s identity," says Cie Nicholson, SVP of Pepsi-Cola North America. "Having a partner like Meadowlands Xanadu makes this a tremendous collaboration."

Xanadu will be anchored by the Izod Center, formerly the Continental Airlines Arena in the New Jersey Meadowlands and feature about 2.3 million square feet of retail and entertainement space. Among the other features planned for Xanadu are the country's first indoor "snow dome" and a skydiving tower. – CelebrityAccess Staff Writers