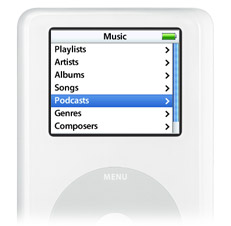 According to new forecasts from The Diffusion Group, a leading consumer technology research consultancy, demand for time-shifted digital audio files or "podcasts" is expected to grow from less than 15% of portable digital music player owners in 2004 to 75% by 2010. TDG's new report, Podcasting: Fact, Fiction and Opportunity, suggests that between 2004 and 2010, the use of podcasting among US consumers will enjoy a compound annual growth rate (CAGR) of 101%.

The podcasting report was written by Marc Freedman, contributing analyst with The Diffusion Group and CEO of RazorPop. "In many ways podcasting is a fad," said Freedman. "Major media producers from satellite to radio to magazines are announcing new podcast programs daily just to appear hip and appeal to young people. But don't be deceived by the hype. The fundamental growth, driven by the boom in portable digital music players, is similarly huge and very real."

Freedman's claims have been validated by a host of recent commercial podcasting activity. ABC and NBC (along with MSNBC and CNBC) are using podcasting to offer recorded newscasts via online downloads. National Public Radio, Infinity Broadcasting and Clear Channel Radio have teed up a number of popular radio programs for podcasting. Even Business Week created a special audio blog to accompany its recent analysis of the podcasting phenomenon. –Bob Grossweiner and Jane Cohen