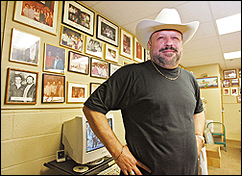 McALLEN, TX (CelebrityAccess MediaWire) — Concert promoter Arnaldo “Nano” Ramirez is reportedly seeking $50,000 from the city of McAllen, Texas, after a performance by ZZ Top that Ramirez organized for the McAllen Convention Center’s grand opening was axed in favor of the Valley Symphony Orchestra.

Ramirez, owner of the now closed La Villa Real Special Events Center, claims to have booked the rock legends after being contacted last fall by McAllen Convention Center Director John Sellers to find acts for the center’s opening weekend. Ramirez told The Moniter that Sellers then sat down at a meeting with him in January to tell him he was going with the orchestra.

“I asked him how come he did not have the decency and the professionalism of letting me know,” Ramirez wrote in an email to McAllen City Manager Mike Perez, according to the paper.

“I have not only wasted three months of work but the credibility with the ZZ Top agency.”

Sellers claims to have never committed to bringing in ZZ Top.

“Nano and I have had many discussions about booking shows and numerous events coming to the convention center,” he told The Monitor.

“There was no contract with the city any point in time…I don’t do verbal agreements.”

Ramirez is seeking $50,000 for time spent booking the band and the damage to his reputation, after having to tell ZZ Top’s agent that the space was no longer available.

“The GM says that date’s available and you go out and find the artist,” Ramirez said. “He told me ‘We’ll fill out the blanks when you come back with the booking.’”

Construction on the $62.2 million convention center is now in its final stages, and the facility is set to open this week. A series of art exhibits will be shown over the opening weekend, highlighted by a gala dinner for the arts hosted by McAllen Mayor Richard Cortez. –by CelebrityAccess Staff Writers