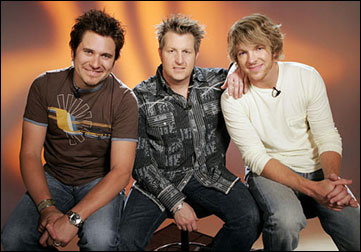 (CelebrityAccess MediaWire) —
Rascal Flatts' third album "Feels Like Today" made a stellar debut scanning an impressive 200,946 its first week in the marketplace. Released on September 28 on Lyric Street Records, first-week sales catapulted "Feels Like Today" into the #1 position on Billboard's Top 200 Album Chart for all formats in addition to the #1 position on the Top Country Albums Chart.

In addition to the chart topping success of "Feels Like Today," Rascal Flatts' two previous albums, "Rascal Flatts," and "Melt," are platinum and double-platinum respectively. "Melt," released on October 29, 2002, debuted at #1 on Billboard's Country Album Sales Chart and #5 on the Top 200 Album Chart on the same day the super group took home their trophy as 2002's CMA Horizon winner. After 101 weeks on the Country Album Sales Chart, "Melt" album sales remain consistent, keeping the album in the Top 15. "Melt," produced four hit singles — "These Days," which was a multi-week #1 across the board at country radio, and Top-10 singles "Love You Out Loud" and "I Melt." "Mayberry," the fourth single from the album, was also another #1 hit for the group.

Rascal Flatts is the reigning Country Music Association, Academy of Country Music and ASCAP Vocal Group of the Year. Rascal Flatts is currently nominated as Vocal Group of the Year at the Radio Music Awards, CMA Awards and American Music Awards. The first single from the album, the title track "Feels Like Today," is currently a Top 10 hit at country radio. –Bob Grossweiner and Jane Cohen