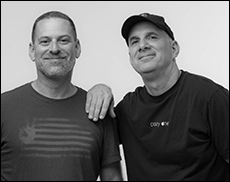 (Hypebot) – As the role and relevance of record labels has changed over time, new opportunities have also emerged in the music business, something which these two ex-major label guys are using to their advantage – and helping out their clients in any way they can along the way.

Guest post by Glenn Peoples, Music Insights and Analytics at Pandora from Medium

Two ex-major label guys, both music lifers, help their clients any way how. Think Winston Wolf in Pulp Fiction (minus the dead body).

Early on a Sunday morning, at a Waffle House across I-40 from Nashville International Airport, Jay Gilbert and Jeff Moskow are talking all things music. They’re amazed by the craziness of the streaming world. They recount some of the living room concerts Gilbert hosts in Los Angeles-some are popular, as in “I just saw his band in an arena” popular. The two rewind to the conversations they had at the just-completed Music Biz, the annual gathering of record labels, distributors, digital service providers, and miscellaneous detritus from the conference’s heyday. Most of all, they talked about the uncertainty in the business. “We’re all trying to figure out where things are headed,” says Gilbert

Fast forward a year. Gilbert and Moskow are finding opportunities in confusion, helping a range of music clients with the label services company they co-founded, Label Logic. “When you’re dealing with artists and release strategies, there are no rules,” says Moskow, a former executive for catalog and special markets division of Universal Music Enterprises. An artist might want to release a couple of EPs before releasing a full album; everybody from Blake Shelton to Nine Inch Nails has experimented with the EP format once digital music fragmented the album. Another artist might want to release only singles. Northern Irish band Ash released one new track every two weeks for 13 months in 2009 and 2010; then, ironically, Ash compiled the singles into an album. In years past, artists seeded albums to peer-to-peer networks to find an audience they couldn’t get at brick-and-mortar retail. Today, hip-hop artists and EDM producers seeking career momentum post their music online. “It’s the wild west,” remarks Moskow.

Label Logic is a product of environment and circumstances. At labels and management companies, lean and fast is the new big and slow. Gilbert and Moskow opened shop to complement capabilities, letting clients-labels, managers, and artists—outsource duties rather than use whatever in-house resources exist. In today’s music business climate, it’s often better to rent than own. Let two “hyper-responsive and responsible” guys, as they say about their approach, take on some of the heavy lifting.

The record business of 10 years ago seems quaint by today’s standards. Back then, people were grappling with consumers’ embrace of single track downloads. Audio streaming services were small players that attracted few customers. Record labels were not yet thinned by painful downsizings and pruning of their rosters. Digital marketing was less essential. Former major-label artists were becoming aware of the independence and freedom digital distribution provided— Radiohead broke the levee by distributing In Rainbows to fans as a pay-what-you-want digital download. Those days are long over. Depending on your perspective, the new music industry either necessitated the hiring of a company like Label Logic or provided the opportunity to hire a Label Logic.

Not that turbulence has battered the music business beyond recognition. Music is still recorded, distributed and marketed to hungry fans. Radio play is great if you get it. A team, whatever its shape and size, must foster a connection between fans and an artist. Some version of a playbook still exists, although a few outdated chapters have been excised. The section titled “The Strategic Importance of Placing Physical Distribution Offices in Every Major Market” went out the window in the early ’00s. “The Art of the Spending Half of a Marketing Budget on a Retail Store’s Endcap” and “How to Negotiate a Huge Record Deal That Will Never Recoup” don’t jibe with the financial realities of today. The ash heap of history also contains a few chapters on music formats: “slotMusic and the Super Audio CD: The Formats of the Future;” “The Undying Album Format, and Why Singles Are Only For Radio;” and “Why You Shouldn’t Bother Releasing Vinyl Records).” A decade ago, few people would have thought people would pay over $30 for a double-LP, 180-gram release of The Eagles’ Their Greatest Volumes 1 and 2.

In shorthand, Label Logic could be called a label services company. But in 2017 the term ‘label services’ begs the question: what the hell is a label? The traditional record label still exists, although staffs are smaller and managers often assume many marketing and e-commerce duties. Some managers play the role of a record label. Artists, too, can create record labels, partner with a mid-sized distribution company, or assemble a team to handle PR, marketing, and project management. Back in the “music should be free” era there were some out-of-left-field varieties of a record label. Mountain Dew created a record label, Green Label, and offered downloads at its logo-emblazoned website. In the 00s, a blog, RCRD LBL, provided free downloads of tracks while generating ad revenue and paying the artist.

Some of the biggest names in the music business have entrusted their artists to Gilbert and Moskow. Renowned artist manager Doc McGhee started working with Label Logic this year. His artist management firm, McGhee Entertainment, has a roster stretching from legends like KISS and Ted Nugent to younger bands A Thousand Horses and Vintage Trouble. McGhee, speaking with a folksy charm, calls Gilbert and Moskow “dedicated” and “smart,” and appreciates how they share their knowledge with his staff . “That’s why I took them in right away. I said, ‘You get all my acts, fuck everybody else.’”

The September release of RSO, a McGhee-repped collaboration of guitarists Richie Sambora and Orianthi, spans every layer of Label Logic’s services. The guys work with all stakeholders-artist, management, and any social agencies, publicist or label involved-to create a campaign and get it to market. Both Gilbert and Moskow recall the many times they’ve sat across a table from an artist with stature and said in plain English, “This is what you need to do.” Peter Frampton, Rick Springfield, and The Temptations might intimidate a less experienced person. While developing catalog campaigns and greatest hits projects, the two have worked with the likes of U2, Bon Jovi, Def Leppard, Guns N’ Roses, Marvin Gaye, Stevie Wonder, and the Bee Gees. Moskow had the pleasure of shepherding Universal’s product and marketing campaign for Motown’s 50th anniversary. (Motown ran with precision timing, and Moskow insists he would drive up to meetings with Motown founder Berry Gordy an hour early—and then sit in his car until the meeting started.) Gilbert sees that experience as a differentiator for Label Logic. “We’ve been at the table with some of the top artists in the industry. With that experience, we speak their language.”

Rick Springfield’s relationship with Moskow and Gilbert preceded the creation of Label Logic. The indefatigable rocker-he’s a 68-year-old who looks two decades younger-worked with the duo when all three were at Universal. Springfield remembers Moskow coming to him as a fan and saying, “I think I can help you.” Three of Springfield’s last four albums debuted in the top 100 of the Billboard 200 album chart. Two of them, Venus in Overdrive in 2008 and Songs for the End of the World in 2012, landed inside the top 50. That’s a big deal, explains Moskow. “If you look at artists in his generation, a lot of them don’t debut in the top 50.” To be fair, he adds, Rick had a vision. “He knew he would get new TV and movie roles. He had Californication and True Detective, [the 2015 motion picture, Jonathan Demme-produced] Ricki and the Flash with Meryl Streep, and a couple of best-selling books.”

Springfield, who released Rocket Science last year and is nearing completion on his next album, doesn’t hesitate to give them credit. “They both have great ideas, plus Gilbert’s a great photographer. He’s done the photo for last four albums,” he lauds. Gilbert shoots album covers for many clients. Growing up in Salem, Oregon, Gilbert would sneak a camera into venues-in the decades before smartphones existed, hoisting a camera at a concert could get you thrown out-to photograph rock bands that passed through town. He would never have thought he’d someday be a professional photographer shooting some well-known musician-clients. Nor would he have believed he’s one day who received requests for a snake and a monkey for photo shoots, but that’s another story (the clients’ wishes were met, by the way). Moskow, who since 1999 has been head of A&R for the massively successful compilation series, Now That’s What I Call Music, has a knack for sequencing an album’s songs. “He’s been invaluable in structuring an album and getting it heard,” says Springfield.

Today’s music business is noisy. Many artists don’t get heard in today’s market because an artist needs new ways to reach fans. “You take advantage of the new stuff because the old stuff has disappeared,” he says. Today, the “new stuff” is streaming. Streaming will dominate the visible future-and streaming has people confused. After digital downloads changed the retail landscape, streaming has blown retail into shards. Gilbert helps clients see through the smoking remnants. He cut his teeth by creating the majors’ first all-digital label, UMe Digital. Without a staff, Gilbert signed artists, oversaw the artwork, shepherded projects from production to marketing, and navigated the legal maze to obtain necessary contracts, all of which preceded digital music and required a revision for a digital product. A Peter Frampton album packaged with a sheet music download was “more challenging than you would imagine getting publishing clearances.” It won a Grammy.

Working at a record label wasn’t for the faint of heart. “You take the hits, and you keep going,” says Gilbert. Consider it boot camp for being independent and helping clients navigate numberless pitfalls. They both worked long hours at Universal, but now it’s different, he says. “It’s a labor of love.”