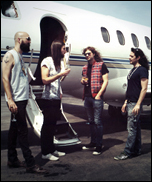 BOSTON, MA (CelebrityAccess MediaWire) — Up and coming acts, Rubblebucket and Tigercity, will float through Boston for a unique concert cruise this Friday, presented by Rock On! Concerts Cruises.

Rubblebucket, a wild young eight-some from Brooklyn, Boston and Burlington, Vermont, draws influence from the likes of Talking Heads, James Brown and Bjork.

Rubblebucket won the 2009 Boston Music Award for Live Act of the Year and was featured in the December 2009 issue of Relix Magazine's "On The Verge: 5 Artists You Should Know." Additionally they were chosen by SPIN Magazine as a "Must-hear artist from the 2009 CMJs."

Brooklyn’s Tigercity has been touring almost continuously, bringing their brand of pop escapism to the masses. Between journeys across North America and a recent European stint, the band returned home to record its first full-length album, enlisting producer Chuck Brody (Peter, Bjorn and Jon, Ghostface Killah, Lykke Li) to help realize their vision for a darker, more mature sound.

The bands' influences range from Prefab Sprout, Chic and Roxy Music to Led Zeppelin, The Beach Boys, and Tangerine Dream. Tigercity hits the road again in September for a full North American tour in support of the album, Ancient Lover, including a stop at the Monolith Festival at Red Rocks Amphitheatre in
Colorado. –by CelebrityAccess Staff Writers