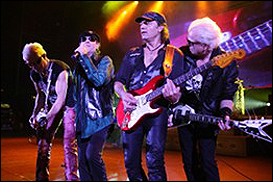 BERLIN, Germany (VIP NEWS) — German rockers Scorpions have fleshed out more dates for their impending farewell trek in support of the band's final album, "Sting in the Tail."

The "Get Your Sting and Blackout" outing, which kicks off June 18 in Holmdel, NJ, now runs through mid-August with a total of 25 North American stops, including concerts in Canada and Mexico.

The band has also mapped South American, Asian and European legs. Details on international dates can be found at the official Scorpions website.

"We want to celebrate [with] a big party around the world," rhythm guitarist Rudolf Schenker, in a January interview with LiveDaily, said of the band's decision to hang up its leather and guitars after more than 40 years. "We've had a really great career, coming out from Germany and showing people that rock can come out of Germany. I think we started as a gang built by friendship and musicality, and going and showing that the Germans can rock."

Last month, Scorpions unveiled "Sting in the Tail," the veteran band's 17th studio album. The set, which features help from Swedish producers Mikael "Nord" Andersson and Martin Hansen, debuted at No. 23 on The Billboard 200, marking the band's highest chart debut in more than two decades. The album's lead single, "Raised on Rock," is currently sitting at the top of the classic-rock radio charts nationwide. –According to Live Daily