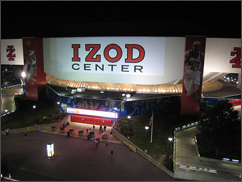 EAST RUTHERFORD (CelebrityAccess MediaWire) — The New Jersey Sports and Exposition Authority paid millions in kickbacks to some of the nation's largest promoters over the course of the last five years in an effort to steer leading acts to perform at Authority venues including the Izod and Prudential Centers. The kickbacks were revealed in documents released following a legal battle between the Authority and New Jersey newspaper The Star-Ledger.

Among the hundreds of pages of documentation released by the court's order are contracts for major performing artists such as Britney Spears and Jay-Z, which reveal numerous special terms, including $3.3 million in rebates to promoters.

According to The Star-Ledger, the lion's share of these rebates went to promoter Live Nation, who collected $2.9 million in rental discounts since 2007, including more than $800,000 in 2011 alone for events staged at the Izod Center. The Izod Center generated event income of $22 million in 2011, meaning Live Nation's rebates accounted for about 3% of the venue's rental revenue.

While not illegal, the rebates were kept confidential. Richard Barnet, co-author of "This Business of Concert Promotion and Touring" and a professor at Middle Tennessee State University told the Star-Ledger "They call it rebates. I call it kickbacks.

According to The Star-Ledger, the deal between Live Nation and the Authority worked on a sliding scale per-ticket rebate, meaning that the more concerts Live Nation booked at the Meadowlands, the more of a rebate per ticket Live Nation would get. Rebates for Live Nation ranged from $4 to $6 dollars per ticket. In exchange, the promoter agreed to provide "priority scheduling rights" for certain concerts.

And it wasn't just Live Nation. Other promoters involved in the rebate system include AEG Live, who recieved $265,000 over three years; Metropolitan, who netted $30,000 and Bowery Presents earned $110,000.

According to James Minish, the sports authority's executive vice president, the program has been very successful for the Izod Center. "It?s given us more shows," Minish told The Star-Ledger.

Ron VanDeVeen, who booked shows at the Izod Center for the Authority elaborated, describing the kickback system as evolving from an effort to ameliorate risk for the Authority, with the venue picking up half of the cost of a show in exchange for a share of the gate. "We?re a state agency. We did not want to take that risk," VanDeVeen told The Star-Ledger.

"Strong-arming is alive and well," said Scher, who's company also received a small share of the rebates. "At the end of the day, it all comes out to more money for the presenter; less money for the Sports Authority," he added.

Spokespersons for Live Nation and AEG Live declined to comment to The Star-Ledger on the story. The documents obtained by the Star-Ledger can be viewed here. — CelebrityAccess Staff Writers