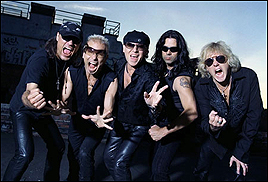 NOVOSIBIRSK, Russia (CelebrityAccess MediaWire) — Russian news agency Interfax is reporting that a stage collapse forced the cancellation of the June 20th stop of the Scorpions tour in the Siberian city of Novosibirsk.

The collapse reportedly occurred mere hours before the start of the sold-out festival that was set to feature a lineup that included the aforementioned Scorpions along with Alice Cooper, Rasmus and Kingdom Come.

"The bulky musical and lighting equipment that all the participants have brought along must have been too heavy, and the metallic support beams just gave way," a member of the production crew told Interfax.

While there were no injuries reported during the collapse, the damage to the stage and rig was significant, with a cost estimated by the promoter to be almost $650,000, Interfax said.

Tickets to the show, which ran from one to eight thousand rubles ($32.00 to $256.00) will be reimbursed. The tour will continue to another Siberian city Krasnoyarsk before heading to Murmansk and Volgograd before a final June 28 Moscow show. – CelebrityAccess Staff Writers