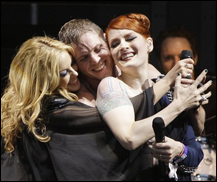 The Australian pop singer sauntered on stage in a sexy black number to join the Scissor Sisters for their performance of “Any Which Way” on Saturday in Somerset at England’s Glastonbury festival.

"For this next song we picked a lucky concert-goer to join us on stage and sing," lead singer Ana Matronic said, and fans went wild once they learned who that “lucky concertgoer” was.

After being diagnosed with breast cancer, Minogue had to pull out of her headlining spot in Gastonbury 2005, making this year her debut at the festival.

Warm temperatures and blazing sunshine made flip-flops rather than rain boots appropriate for this year's Glastonbury festival. Festival founder Michael Eavis called it the "the hottest Glastonbury ever," according to the Associated Press.

It was a change for the festival, celebrating its 40th anniversary, which is often famously rainy and requires the 140,000 music fans to don waterproofs and boots. This year, the festival's medical team treated more than 2,000 people for heat-related problems, like sunburn and dehydration.

On Friday, Gorillaz headlined the main stage, replacing U2 who were forced to cancel after singer Bono injured his back. However, U2's The Edge joined Muse to wrap up Saturday evening as the crowd boomed during an encore performance of “Where the Streets Have No Name.”

The festival wrapped up Sunday with performances on the main stage by Jack Johnson, Norah Jones, Faithless and finally by Stevie Wonder.

Organizers intended to show the World Cup football game between England and Germany on a large screen at the venue on Sunday afternoon. Eavis said he wouldn't be watching.

"Too busy, I am afraid," Eavis said according to the Associated Press. "I don't quite understand the need for football."
–by CelebrityAccess Staff Writers