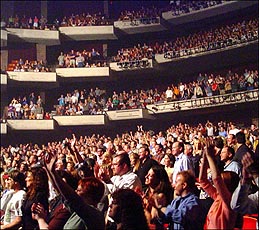 TAMPA, FL (CelebrityAccess MediaWire) — The Tampa Bay Performing Arts Center on Friday announced that it will not renew its contract with the promotion company Live Nation (formerly Clear Channel Entertainment), the dominant presenter of touring Broadway shows across the country. According to the St. Petersburg Times, The Tampa Bay Performing Arts Center will allow its promotional contract to expire next year and do its own scheduling and marketing.

"It was purely a business decision," TBPAC president Judith Lisi said Friday. "It became clear we just weren't where they were, and they weren't where we were. I just felt it was time to move on."

Lisi said the center had matured to the point that it can schedule and market its own lineup of Broadway shows without the help of an independent promoter.

The center has more than 10,000 Broadway season ticket holders, among the highest attendance numbers in the country and the area's largest dedicated theatrical arts venue – the 2,600-seat Carol Morsani Hall, she said.

Cutting out the middle man would allow the center to keep more of the revenues generated by Broadway shows, which tend to bring in the most profits. It also would help fund other programs and productions throughout the year.

Despite the change, Lisi said she expects the center to maintain a hefty Broadway schedule.

"I think we'll continue to do pretty much what we're doing," she said.

In fact, the number of touring Broadway shows in the area potentially could expand. One possible venue: the Mahaffey Theater in St. Petersburg.

The theater has undergone a $20-million renovation, and Progress Energy Florida recently pledged at least $250,000 per year for 20 years to help attract performers.

In addition, the city has hired SMG, a Philadelphia conglomerate that bills itself as the world leader in venue management, marketing and development, to manage the facility.

Instead of presenting shows itself, SMG hopes to bring in productions from major concert and theater promoters, such as Live Nation, House of Blues, AEG Live or Fantasma Productions.