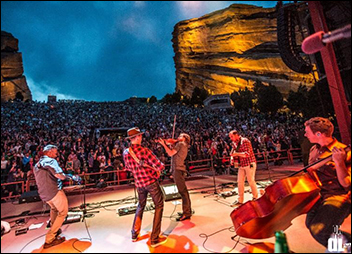 DENVER, CO (CelebrityAccess) — The Infamous Stringdusters kicked off their summer tour on May 6th at Colorado's famed Red Rocks Amphitheater. The band played to one of their biggest non-festival audiences ever and played a 90-minute concert that included special guests Lee Ann Womack and Nicki Bluhm


Both singers are featured on the acoustic five-piece's new album Ladies & Gentlemen, which was released earlier this year on Compass Records and just last week was issued on 140 gram vinyl. The modern bluegrass virtuosos have been on the road in support of Ladies & Gentlemen essentially non-stop since early February and will be on the road all year, performing at festivals and their own headlining shows.


In a recent live review, Jay Miller of the Patriot-Ledger said, "the main impression would come from the dazzling fretwork of the five musicians, the sheer thumping energy generated by the quintet (which has no drums), and the amount of music provided. Over two sets the Infamous Stringdusters performed 25 songs and two and-a-half hours of music, and if all that sounds like something Dead fans can appreciate, you can likely expect to see even more of them adopt this young band of pickers (4/9/16)."

Following the February release of their Ladies & Gentlemen album, The Infamous Stringdusters presented The L&G Tapes LIVE. This 13-track compilation showcases the favorite live recordings from their recent "Ladies & Gentlemen" tour, their biggest tour to date. The live tape is a way to show thanks to their dedicated fan base. These handpicked performances were mixed by band member Andy Falco.

The Stringdusters' new album was cited by Rolling Stone as one of the "Most Anticipated Country Albums of 2016" and has been widely praised for the purity of their bluegrass and the talented female vocalists who've recorded with them.


"Infamous Stringdusters is a virtuoso five-man string band, rooted in bluegrass but ready to stretch…the songs are even better: ruminations on time, distance, mortality, purpose, shared humanity and long-term love. The women's distinctive voices etch each one with the clarity it deserves." Jon Pareles, New York Times.