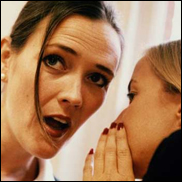 I was out with a friend who owns a restaurant last night. He told me a customer who has a good experience tells two people. One who has a bad experience tells eight. In other words, it's easy to build a bad reputation and much harder to construct a good one.

Speaking of bad reputations, I remember my father employing Express Mail during a vacation. The Postal Service absolutely positively guaranteed delivery by noon. Which, of course, didn't happen. So here's my father, waiting to leave a hotel to continue his journey, stymied not only in his travel plans, but his work plans, because the United States Postal Service doesn't keep its word. The Postal Service has its own version of Stephen Colbert's "truthiness". Can you blame them? Losing all that money, trying to manage all those disgruntled employees?

Yes. I'm paying for a service, I expect performance in return. It's kind of like American cars. Even German ones. They break. Not always significantly, but when you bring them in for service, you've got a list of defects. Whereas with a Japanese car…there's just nothing wrong. Who even thought it was possible?

Speaking of Japan, my copy machine conked out. Beyond warranty, but with very few miles on it. Perusing the manual, I found a phone number. Not the 800 number the technician ultimately gave me, but a lifeline that I could use to try and get some answers.

Speaking of manuals, I keep them. But you no longer have to. Because companies now put them online. Every Apple manual is online. I've found the HP ones. The Web is a plethora of information. Except in the music world. Why doesn't Universal Music's site list every
employee, and their e-mail address? Why is there no company history?
How come there's no SERVICE? That's what we use the Web for, information, answers to our problems. This is how you bond in the twenty first century, by giving access, refusing to leave customers out in the cold.

Anyway, the technician couldn't fix my copier over the phone. I know that sounds conceptually ridiculous, but copiers are no longer dumb, they're little computers, you can push a number of buttons, enter some codes and fix problems. Actually, I got it to work for a second and was able to photostat some important documents, but then it conked out again. Which meant I had to return it to Sharp in Illinois for repair.

They used to give you someone to call locally. But no, they insisted I send my copier back to Naperville.

Do you do this?

My aforementioned father taught me to treat my stuff well. I've still got the SLR camera he gave me in college, even though it's the equivalent of straight skis, superseded technologically. I treat everything I own with respect. Too much, in fact. I've now found you're oftentimes better throwing your old stuff away. I learned this fixing VCRs. You're better off buying a new one. And how good are the repairs anyway? Do you trust American workers?

That's a completely different question. And I don't. There's just not the incentive. They're not profiting enough to be dedicated. Or educated enough to properly diagnose problems, never mind fix them.

So you make a value judgment.

In this case, the copier cost $400. They were going to charge me $140 to fix it (parts included, we Americans are suspicious of hidden charges, when anybody quotes a price we respond with a litany of questions, insuring this is truly the FINAL price.) And I had to pay to ship it to them.

Well, how much do you think that's gonna cost?

I decided to fix my machine.

I scoured the garage, I still had the box, thank god, I'd just pack it up and…

Schlepp it out of the house and into my not so large car and then to UPS, which is like the Post Office, just more efficient?

You get no respect at UPS.

Nah, it might be more expensive, but I'll go with FedEx Ground. You can track, they'll spend a few minutes soothing your anxiety…

Maybe you can do all this at UPS now. But I don't feel safe. And since I ship only occasionally, I want no learning curve.

And I don't want to do all that lifting.

So I call FedEx. 1-800-Go-FedEx. Their advertising worked, I didn't have to look up the number.

When I got the voice prompts, I just said "Operator", and I was clicked through to a real live person. Whose accent was not so heavy I couldn't understand her, who seemed there to help. Sure, they'd pick up, for an additional four dollars.

Yes, I could use my regular FedEx account, the one I use to send overnight packages.

But I had to request a pickup a day in advance and give them a six hour window.

Now if this was the Post Office, I wouldn't count on them even coming during those six hours, even coming at all. But having told this woman that I wanted someone between 10 and 4, there was a knock on the door EXACTLY at 10. The delivery person picked up my copier and was gone that fast.

The paperwork? I did all that online. Printed the bill myself.

Point of all this? I'M TELLING YOU!

No one tells somebody what a great experience they had at the shed, at any gig. They might say the BAND was great, but they don't say parking was fairly-priced and efficient, that the food was great. And everybody hates TicketMaster.

Does it have to be that way? Are these truly unsolvable problems? Is the concert industry like the Post Office, hamstrung from the get-go, unable to deliver on its promises?

In other words, I can ship something halfway across the country, seamlessly, for ultimately $32, but I pay over a hundred and have to wait endlessly and am treated like a bison at the gig?

I feel good that I got my copier repair process started. I have complete faith FedEx will deliver my package intact. I'm slightly elated. And I wanted to share that with you.

The same way when I used to buy a paper ticket at the record store I was thrilled. As opposed to buying online, overpaying, not getting what I want, if I can get any ticket at all.

Life doesn't have to be a gauntlet. And that restaurant we ate at last night? The food was very good, but it was a third empty. Used to be that you'd have to wait an hour for a table. Wanting suggestions for further dishes, our waiter was stumped. How hard
would it be to verse the help in the offerings of the establishment.
To hire people who can interact in a way that the customer feels connected, not merely served?

When the going gets tough, and believe me, it's very tough, quite rough, you don't cut corners, you deliver more. You bond your audience to you. You deliver such a good experience that your customer becomes your marketing team.

That's the twenty first century. Where buyers only trust their peers and ignore most advertising. Don't sell the sizzle, sell the experience. And know you can't change perception overnight. The little things count. Get them right, and you're on your way to success.