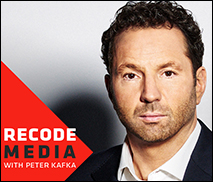 You've got to listen to Michael Rapino on Peter Kafka's podcast. Or maybe not, you haven't got that much time and don't care but then you can't get a ticket to the show and need a scapegoat and denigrate Ticketmaster and illustrate your lack of knowledge and contribute to the problem and there you have America in a nutshell…a land overloaded with information where everyone complains and points to inaccurate facts.

Within said podcast Rapino delineates Live Nation's complete business model, tells more about the company's vision than you can get by reading a lifetime of Ben Sisario articles or "Rolling Stone" pieces. This is the music business education you're yearning for. And it's definitely business, if you want creativity look to the labels, then again, the labels aren't sure what they're looking for, bunkered down in search of cash they're pursuing commercialism, and that's why the listener is unsatisfied. As for those doing it for themselves, testing limits… It's hard to get attention, hell, I've never even seen anybody write about the above podcast or email or tweet about it, and Rapino is one of the two most powerful people in the music business!

The $8 billion figure is the amount by which we underprice tickets.

But let's go back a step. If Drake or Beyoncé play Madison Square Garden, what are the odds you can get tickets anyway? Superstar acts might tour every three or four years, millions want tickets, not everybody can go. Just because you can tweet and pontificate on Facebook that does not mean you can get inside the building. Which flummoxes you, that you have access on Ticketmaster but you can't conclude the transaction.

Because of the bots.

But this is not a technological problem, no, this is all about economics!

Which abhor a vacuum. It's no different from drugs. The government reduces Oxy availability and the heroin dealers see an opportunity and move in. That's what happened, that's why everybody's o.d.'ing, heroin is not only cheaper, it's a more available fix.

So get off your highfalutin' college education pedestal and see when an entire industry underprices its inventory there will be those willing to move in and skim the profits. You can't put billions up for grabs and expect those who are not already rich, or those who already are, the hackers and the ticket scalpers respectively, to not move in and take it.

Of course there's subterfuge in the offering. When tickets finally go on sale they may be less than a tenth of total inventory. Pre-sales and holdbacks making up the majority. Get your Amex or Citi card, or both, join the fan club, do your best to be an insider, there are rewards for being a regular customer as opposed to buying once a year… But the real problem is we're underpricing our tickets.

What's the value of a front row Beyonce ticket? Four hundred? A grand or fifteen hundred in NYC? That's what they end up going for, either through scalpers or platinum procedures. Yes, platinum, it's a way for the industry to capture that income without looking bad. You give a good seat and a laminate and maybe a poster or a meet and greet and somehow that rationalizes a ducat price far in excess of face value. But the truth is people just want the seats, close, and that's what they're worth.

And then you have Lin-Manuel Miranda bloviating about bots in the "New York Times." We haven't even been able to eradicate e-mail spam, what are the odds we can mess with the bots? Low.

But give "Hamilton" credit, they just jacked up the price for good seats to $849. Don't get your knickers in a twist, that's what they go for anyway, but not via the primary sale, but scalpers.

Or, you can enter a lottery for a cheap seat, wherein victors get in for just ten bucks. But the odds of winning are about as good as those in the California Lottery.

But "Hamilton" has it half right. The rich have unlimited bucks, they're gonna pay anyway, why not capture that income?

And the poor are priced out, so give them hope, give them a small chance.

But the truth is in order to make this work, to get rid of the bots, acts have to charge what the tickets are worth. That's what the Stones do, that's why you can always get a ticket.

But the wimps paying fealty to their fans while they make backroom deals to scalp their own tickets are worried about the backlash. Screw that, the public already knows what tickets are worth, that's why StubHub and the scalpers are so profitable! And how great is it we work in an industry where even the poor will overpay for what they truly desire, yes, people will scrimp and save and blow the piggy bank for the show they want to see. And you can always get a ticket at an exalted price, just Google, the offers come right up.

Let's come out from under the covers, let's stop blaming the bots.

Price the tickets at what they're worth.

Employ a paperless or lottery system to ensure that the great unwashed can get in.

Expect outsiders to bitch, they always bitch, you've got to ignore them.

The rich people are gonna get most of the good seats.

And there you have America. You might be priced out of "Hamilton" at $849 a ticket, but to a corporate denizen, someone who landed in Teterboro, that's just the cost of doing business, their only decision is whether they want to go or not.

So you can't get a ticket because there aren't enough, they aren't priced properly and the rich scoop up the good ones.

We can start by pricing our shows properly. As Rapino says, we've got to raise the price to sit up close and personal and lower it to sit in the upper bowl.

But that's never been the case. A bad seat costs almost as much as a good one.

But now, more than ever, people want to sit up close.

I don't expect rapid change. Acts only have one career, and frequently it's very brief. But it's the acts' responsibility to fix this problem. And railing at scalpers picking up margins like candy ain't gonna do it. Who'll follow the Stones into flex pricing? Who'll follow Metallica into paperless? What will it take to make this behemoth industry move forward?

I'd say there's no chance, then again, this political season has illustrated the public knows the truth and is ready for change.

We're ready for change in the ticketing business.