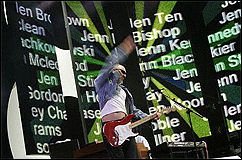 NEW YORK (CelebrityAccess MediaWire) — Pete Townshend and Roger Daltrey have announced that they will kick off their first world tour in over 20 years, starting September 12th in Philadelphia.

The legendary rock band is already confirmed to play 17 dates at arenas and amphitheaters across the U.S. and Canada, with more U.S. shows to follow in November and December. Planned concerts for 2007 include South America, Japan, Australia and Europe, will be announced in the coming weeks.

The band recently completed a string of highly acclaimed European shows in June, and will release their first studio album since 1982’s “It’s Hard” on October 23rd. The band plans to perform songs from their new mini rock opera, “Wire & Glass,” as well as songs from the new album and their greatest hits and rarities drawn from the band’s entire career.

“For the first time in 25 years we are returning to the USA with great live music – the entire catalogue of our old stuff – and new music. We have a great new video show, a new Mini-Opera and plans to do some special shows with special themes. Our European shows are warming us up, and we will be in great form when we start the tour in September,” said Pete Townshend in a statement. “I don't think I've ever looked forward to a tour as much as this one. Roger and I are both fit and well, ready to rock.”

“Pete and I are really excited to be returning to the US with some brand new music to play. We'll also be digging out some rarities that we've not played for a long time,” said Roger Daltrey. “We're looking forward to reconnecting with our American fans and hopefully seeing some new ones coming along too.”

Daltrey and Townshend will be joined on stage by John “Rabbit” Bundrick on keyboards, Pino Palladino on bass, Zak Starkey on drums and Simon Townshend on guitar and vocals.

“The explosive on-stage energy from The Who makes for a truly electrifying show,” Steve Howard, EVP of Touring at promoter CPI, said in the statement. “The Who is back like never before.”

The full list of confirmed dates for The Who is as follows:

The Who North American Tour will continue in North American November & December with additional show dates and venues to be announced. –by CelebrityAccess Staff Writers