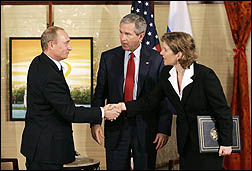 MOSCOW (CelebrityAccess MediaWire) — The United States and Russia have agreed in principle on a bilateral trade pact that will push Russia closer to becoming a member of the World Trade Organization (WTO), the Office of the U.S. Trade Representative (USTR) announced November 10.

“We have an agreement in principle and are finalizing the details,” said USTR Susan C. Schwab. Calling it “a clear indication of Russia’s efforts to participate fully in and benefit from the rules-based global trading system,” Schwab said the pact “will mark an important step in Russia attaining membership in the WTO.”

Representatives of both countries will be in Hanoi, Vietnam, for the November 18-19 Asia-Pacific Economic Cooperation (APEC) meetings, and want to complete the agreement at that time, according to the USTR. (See related article.)

The agreement addresses increasing access to Russian markets for U.S. agricultural products, industrial goods and services such as telecommunications, banking and securities, and insurance. It also seeks to ensure Russia’s enforcement of intellectual property rights and anti-piracy legislation. According to a fact sheet released by the USTR, the agreement “encourages greater transparency and a strengthening of the rule of law in Russia and fosters economic reform in Russia” as well.

Russia must complete all of its bilateral market-access agreements with individual countries before it can begin the multilateral negotiations necessary for its accession to the WTO. If signed, the pending agreement with the United States would allow the United States to work in close collaboration with Russia and other trading partners to help Russia complete its Protocol of Accession and Working Party Report, documentation necessary for WTO acceptance.

If Russia is admitted to the WTO, U.S. businesses, farmers and industries will only reap the benefits of Russian WTO membership if Congress first grants Russia permanent normal trade relations (PNTR). In preparing the pending bilateral agreement, the Bush administration consulted with several congressional committees about U.S. trade interests with the goal of paving the way for Congress to grant Russia PNTR status, according to the USTR.

Russia began negotiating with the United States and other trading partners in 1994 on the terms of its accession to what is now the WTO. The WTO previously was known as the General Agreement on Tariffs and Trade (GATT) Organization. – CelebrityAccess Staff Writers