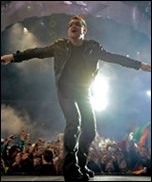 BEVERLY HILLS, CA (VIP NEWS) — U2 will become the first international act to make use of two stadiums built especially for the 2010 FIFA World Cup when its 360 Tour lands in South Africa next year.

An announcement made today by Live Nation Global Touring and Big Concerts confirmed speculation that the Irish group will play two dates in February 2011. The band last performed in South Africa in March 1998 on its PopMart tour.

The first of the shows will be on Feb. 13 at the FNB Stadium, located in the Johannebsurg township of Soweto and the site of the opening and closing matches of the FIFA World Cup. It had a 94,000 capacity during the World Cup.

"U2 has always been at their best when surrounded by their audience, and 360 allows that to happen – in stadiums", U2's manager Paul McGuinness said in a statement. "South Africa has the best stadiums in the world now and we're really looking forward to bringing the full U2 360° production into these fantastic facilities."

U2 is not the only act making use of the newly built stadiums: Live Nation's South African partner, Big Concerts, recently announced that Neil Diamond will make his South African debut on April 2 at FNB Stadium in Soweto, followed by shows at Durban's Moses Mabhida Stadium (April 5), Port Elizabeth's Nelson Mandela Bay Stadium (April 8) and Cape Town Stadium on April 11.

According to a statement, the U2 360 Tour has recently finished up a European leg and is due to arrive in New Zealand and Australia before Christmas. By the time it reaches South Africa, U2 360 will have been seen by over 4,5 million fans.

The South African dates are produced by Live Nation Global Touring in association with Big Concerts. The tour media partners are 94.7 Highveld Stereo, 94.5 KFM and MNET.