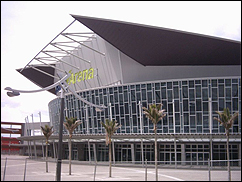 AUCKLAND, New Zealand (CelebrityAccess MediaWire) — The repeatedly-delayed opening of New Zealand’s Vector Arena has finally been set as March 24th with a performance by Rockstar Supernova.

Arena management company QPAM and Vector Arena chief executive Bruce Mactaggart confirmed that the 12,200-capacity multi-purpose complex would be ready to host the concert in the next few weeks.

An official public opening has been set for April 19th.

The arena was due to open more than a year ago, but has faced several setbacks caused by problems ranging from seating issues and complications in the design and construction of its roof to a legal battle between its builder Mainzeal and Crawford Architects. –by CelebrityAccess Staff Writers