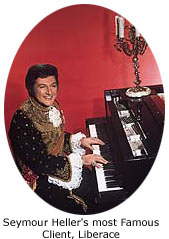 Seymour Heller, Liberace's personal manager for 37 years, died October 8 at his home in Beverly Hills, California. He was 87.

In 1947 Heller joined Dick Gabbe and Sam Lutz and formed one of the first bi-coastal personal management companies. During his 60-year career, Heller represented acts such as the Andrews Sisters, Ginger Rogers, Mel Torme and Regis Philbin. Heller represented Liberace from 1950 until the flamboyant pianist's death in 1987.

Heller is survived by his wife of 50 years, Billie; sons, Bruce and David; and daughter, Elizabeth.

Donations may be made to: