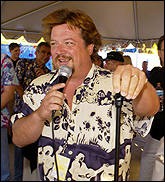 Zelisko booked his first show as a promoter when he daringly brought Mahavishnu Orchestra to Tucson on June 2nd, 1974 when he was at the tender age of 19.

Zelisko went on to establish himself as a major player in the market and his Phoenix-based company Evening Star Productions produced a wide range of performances, including festivals, concerts, theatre and corporate events. Among the artists Zelisko has worked with are The Stones, Eric Clapton, Santana, Tina Turner, Pink Floyd and numerous others.