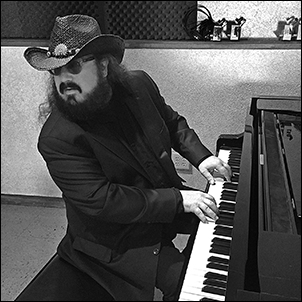 (CelebrityAccess) — The release of singer/songwriter/pianist Grayson Hugh's ”An American Record" in 2010 was met with praise from music critics and Hugh’s loyal fans, who had been waiting over fifteen years for some new music.

Pulitzer Prize-winning Miami Herald columnist Leonard Pitts Jr. was moved to write: "In a world where music is often brittle artificiality, the music he makes is hard and strong, convicted and convincing. And true. Most of all, true. It's there in the gritty lament of his voice, in the roughhouse eloquence of his piano, and the atmospheric poetry of his words. He has that thing Sam Cooke and Ray Charles had, that thing you still hear sometimes in Bruce Springsteen, that lonely, train whistle in the dark thing, that yearning, keening thing that gets right to the heart of what it means to be alive, what it means to be a human being. This is ‘An American Record'. Some of us are glad the wait is over at last." – Leonard Pitts Jr., Miami Herald, March 8, 2010

Hugh's new album "Back To The Soul", a return to his southern soul roots, was released on August 12, 2015, to more rave reviews. In his review for Soultracks.com, Howard Dukes wrote: "Hugh, like soul music idols Otis Redding and Marvin Gaye, is at his absolute best when wearing his heart on his sleeve and being totally transparent. In fact, Hugh goes way beyond keeping it real – he keeps it honest. With his feet firmly rooted in the soul and blues of Memphis and New Orleans, Hugh has crafted a record that is about as eloquently biographical as a music project can be. The one quality of Hugh's career that stands out to me, besides his talent, is patience, and "Back to the Soul" is a patient record. Hugh is an expert storyteller who doesn't rush his delivery. He allows the stories contained in his songs to unwind and that will bring a sense of satisfaction and a deeper appreciation of his struggles and gifts with each listen. This album beautifully completes a more than three decade story of a talented artist who, after too many years away, found his way back to his musical home." – Howard Dukes, Soultracks.com, August 14, 2015

Raised in the quiet suburb of West Hartford, Connecticut, singer/songwriter/pianist Grayson Hugh moved to New York City in 1986, determined to get a record deal. Camping out in a friend's basement barber shop, he pounding on doors with his tapes the old-fashioned way, playing his songs for everyone he could. He soon caught the attention of Lou Reed's bassist/producer Fernando Saunders and eclectic jazz producer and percussionist Kip Hanrahan, both of whom hired him to record on their records. The fateful moment occurred when he and producer Michael Baker (producer of The Blow Monkeys, Wet,Wet,Wet, Patty Griffin) just happened to be in the same upper East Side elevator. The two struck up a conversation and Baker ended going up to Hugh’s manager's apartment to hear some songs. Amazed at what he was hearing, Baker asked Hugh to play the piano and sing live right there in the apartment. He later told his girlfriend "I've just found the next Buddy Holly".

The affiliation with Baker resulted in RCA signing Hugh to a record contract in 1987. RCA President Bob Buziak recalled "Grayson was one of the only artists we signed largely as a result of a live impromptu performance on a piano right in my office!" Hugh's debut album "Blind To Reason", released on RCA in 1988, spawned several international hits, including "Talk It Over", "Bring It All Back" and "How Bout Us", and eventually went Gold both overseas and in the U.S. Hugh has been wowing audiences and gathering loyal fans around the world ever since with his masterful piano playing, his poetic lyrics and his soulful singing. “Blind To Reason” went Gold in the U.S. & overseas and his follow-up release "Road To Freedom" (MCA 1992) was called one of that year's Top Ten albums by Billboard Magazine.

"Road To Freedom" also caught the attention of Hollywood. Director Ridley Scott heard an advance pressing and requested the use of two of Hugh's songs for the 1991 film "Thelma and Louise". Director Jon Avnet asked Hugh to record Bob Dylan's "I'll Remember You" for the ending of another hit film "Fried Green Tomatoes". Using Eric Clapton's touring band, Hugh dipped back into his experience as a pianist in a black gospel church as a youth, and arranged and recorded "a gospel-style assault of the song that could raise the dead" (Peanuts, The Cleveland Sun, Dec. 3, 1992).

Besides being an acclaimed songwriter and performer, Hugh also taught songwriting at Berklee College Of Music in Boston, MA from 1999 – through 2003. He also was commissioned to compose scores for several notable modern dance companies during his time in Boston, including Prometheus Dance and Christine Bennett Dance.