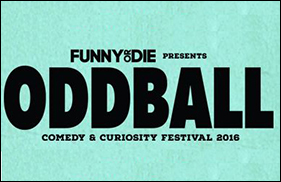 LOS ANGELES (CelebrityAccess) — Live Nation has revived their Funny or Die Presents The Oddball Comedy & Curiosity Festival for the fourth consecutive year, announcing dates for the tour starting in August.

This year's fest includes 21 dates in all, kicking off on August 25th at the Perfect Vodka Amphitheater in West Palm Beach, FL, and wrapping up on October 2nd at the Ak-Chin Pavilion in Phoenix, AZ.

As well for 2016, teleivision network IFC is taking over the event's second stage, now renamed IFC's Slightly Off Comedy Stage. The show before the big show will be hosted by Big Jay Oakerson and will feature local and emerging comics in each city. IFC will select up-and-coming talent at a number of tour stops. – Staff Writers