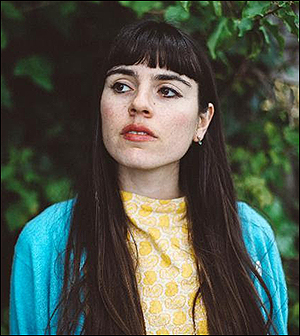 (CelebrityAccess) – Hazel English has announced that she will be releasing a double EP. Just Give In / Never Going Home is due May 12th via Polyvinyl and Marathon Artists, and to coincide with the announcement Hazel is sharing a new video for "Fix," the lead single from the double project. The spacey indie pop track receives an appropriately sun-kissed and romantic visual treatment from director Austin Kearns.

Hazel had a hugely successful 2016, which saw her release her debut EP Never Going Home to critical acclaim from publications such as Stereogum, Wonderland, The Line of Best Fit, Noisey, Gorilla vs Bear and DIY as well as BBC Radio 1 tastemakers Annie Mac and Huw Stephens. The limited vinyl run of Never Going Home sold out almost immediately, with its streams eclipsing the 7,000,000 mark and still counting. For her latest release she combined her debut EP with a strong selection of six new tracks.

It's easy to get swept up in the numbers of fledging success. Playcounts and streaming stats all play a part, and in 2017 you can near enough to work out exactly how many Mexico City-based fans dig a new artist, if you please. But for anyone making music, IRL encounters are way more important. Hazel English gets plenty of these, and for her, these conversations with fans are why she makes music in the first place.

The Oakland, San Francisco-based artist makes amazingly infectious dream-pop that's bound to affect people. Her candid songwriting – whether documenting the experience of leaving home or living with anxiety – draws people in. "It's really cool to hear when people say, 'This song really helped me this week,'" she confesses. Although writing personal lyrics can play a primary, self-facing purpose ("it's cathartic"), nothing tops the realisation that someone else feels the same way. "Something I made had an impact on somebody else – that blows my mind. Actually having a conversation with someone who loves my music, that means a lot to me. Suddenly it's not just a number, it's a physical person standing in front of me that's getting something out of this."

New 2 X EP release Just Give In / Never Going Home, out via Polyvinyl and Marathon Artists, is a startling collection of old and new, compiling her debut EP alongside six new tracks to create her first full LP-length release. The Never Going Home side combines the hazy, direct songs that have helped Hazel rise to prominence this past year, while the Just Give In side documents her blossoming creative partnership with Jackson Phillips (aka Day Wave). Both musicians met when Hazel was working in a local book shop. Jackson popped by on his way to get a synth repaired, and the two got talking about music, before deciding to collaborate. It's a meeting of minds that's helped forge this essential debut collection. Each song sports a timeless, sun kissed aesthetic that you might expect from Bay Area-based creatives, but Hazel's direct style and pop sensibility take things to another level.

There's no guessing which direction future material will strive towards, but virtually nothing seems off limits. In turn, this double EP doesn't just serve to document Hazel's more-than-promising first steps – it suggests that whatever's next round the corner will be the making of a star.