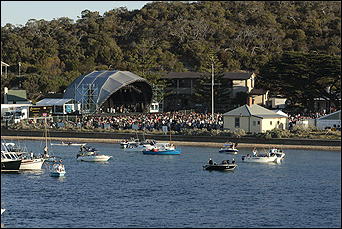 POINT NEPEAN (CelebrityAccess MediaWire) — The Easter-weekend Point Nepean – A Music Experience festival drew many enthusiastic responses from rock fans about the music, and even more excitement about the venue.

The event, which drew 7,500 fans over the weekend, was the first festival held at the formerly contentious pocket of land at the tip of Port Phillip Bay. It was the location of the state’s quarantine activities, where new immigrants and returning servicemen were screened for infectious diseases, and later leased to the army to train cadets.

The 90-hectare site became mired in controversy in 2003, according to The Age, when the Federal Government decided first to sell, then lease, the site. The move sparked a major community campaign that forced the

government the abandon its commercial development plans in favor of turning the site into a national park 2009.

“By having festivals like this, it means that huge numbers of people can come into a n area that has been hitherto unavailable,” Alan Studley, CEO of the Point Nepean Community Trust, told the paper.