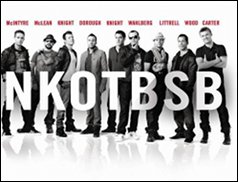 NEW YORK (AP) — Ladies, keep your panties on, the boy bands are back.

New Kids on the Block and the Backstreet Boys have announced that they will begin touring together during the summer of 2011.

The public will get their first sneak peak of what’s to come on November 21 as all nine men perform live at the American Music Awards in their first joint televised appearance.

“It started when we got together at Radio City Music Hall a few months back.  We wanted to do something big for the crowd in NY.  So we got the Backstreet Boys to come down to Radio City and we put together a performance of ‘I Want It That Way’ in about 5 minutes.  It was electric.  Something happened when they came out on stage.  The crowd went to a place that we never heard it go to before,” said the guys of New Kids on the Block live on air with Ryan Seacrest this morning.

With over 200 million albums sold between both bands, these two pop sensations have been on the music scene for over three decades.  Aiming to please, these guys plan to give concert goers and diehard fans everywhere the ultimate “night out” experience, according to the press release.

New Kids on the Block and Backstreet Boys' Tour Dates: