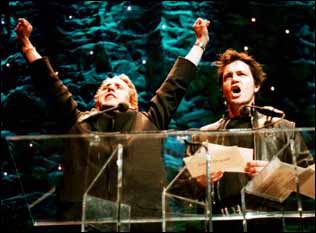 Former Third Eye Blind guitarist Kevin Cadogan reached an out of court settlement
June 18 with the Third Eye Blind camp in the multimillion dollar breach of contract,
wrongful termination and fraud lawsuit he filed two years ago. Cadogan says he has not received any
writer, producer and record royalties since his termination. He also claims that he and lead singer Stephan Jenkins had a verbal agreement to share ownership of the band, and that Jenkins established business dealings behind his back — 3EB Touring and Third Eye Blind, Inc, where band profits were divided. Details of the
settlement were not disclosed.

Cadogan, a member of the group for six years, was unexpectedly fired after a January 2000 performance January 2000 at the Sundance Film Festival in Park City, Utah. .

"I continue to be proud of the music I created as part of Third Eye
Blind and many of the experiences I had with the band during our
time," said Cadogan in a statement.
"Now that I can put this behind me, I'm looking forward to moving
ahead with the full drive and focus that started my career in music
in the first place, and I'm excited about the opportunities that lie
ahead." At press time, there was no comment from Third Eye Blind.

Cadogan has since formed a new band, Bully.