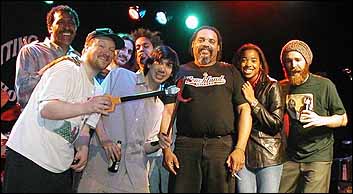 PROJECT/OBJECT, the ever-evolving Mother of Frank Zappa reinvention, returns to its most popular configuration in July for a brief East Coast tour before crossing the Atlantic to make its European debut at the Zappanale Festival in Germany. Zappa vocalist-guitarist Ike Willis returns as special guest frontman for PROJECT/OBJECT after sharing those duties in the spring with fellow Zappa vocalist Napoleon Murphy Brock on their first national tour together in 18 years. The extensive U.S. tour set attendance records in clubs and theaters from coast-to-coast. Demand was so great that PROJECT/OBJECT is planning another large-scale tour for the fall, once again pairing the two Zappa vocalists.

"We had an absolute blast mixing it up with Ike and Nappy on stage and the fans couldn't get enough," said PROJECT/OBJECT ringleader/guitarist Andre Cholmondeley. "So we were fortunate enough that our schedules allowed us to pair them up again for an encore in the fall."

The fall tour will mark the first time the band will have mounted two such tours in the same year, proving that PROJECT/OBJECT's ongoing mission to perpetuate the music of one of the most important and influential composers of the 20th century is increasingly vital, almost a decade after Zappa's untimely death.

The summer tour, with Willis, kicks off July 10 in Woodstock, NY and wraps up 10 days later in Atlanta, GA. Along the way, PROJECT/OBJECT will be featured at the moe. or les festival and campout in Brandywine, MD, which marks the historic summer pairing of jam band allies moe. and Les Claypool's Frog Brigade. Later in July, PROJECT/OBJECT will be joined by Ike Willis in Germany as it makes its European debut at the Zappanale Festival in Bad Doberan.

With Willis on guitar and vocals and Cholmondeley on guitar, the rest of the PROJECT/OBJECT lineup is comprised of Robbie "Seahag" Mangano (guitar); Dave Johnsen (bass); Jordan Shapiro (keyboards), and Wesley Paich (drums).

Willis (1978-88) is one of Zappa's most durable and beloved sidemen, whose soulful vocal hysterics are best remembered as the voice of Joe on the "Joe's Garage" rock opera trilogy. He toured the world six times with the maestro and was the voice of his music for 14 years on countless recordings, many still unreleased.

PROJECT/OBJECT will be playing many authentic renditions from "Roxy and Elsewhere," "One Size Fits All" and "Joe's Garage" at every stop on this leg of the tour, plus plenty of other classic Zappa material Willis helped make famous.

Since its formation a decade ago, PROJECT/OBJECT has been rapidly gaining notoriety for its onstage dedication to its singular mission. The band continually introduces successive generations of improv-oriented music fans around the country to Zappa's monumental legacy, performing music from every era of Zappa's prolific career while acutely recreating the unique fun and excitement of the Frank Zappa concert experience.


Koko Taylor Cancels A Few More Concerts Due To Illness

Koko Taylor has had to cancel a few shows but will be back on the road on June 27 when she performs at a benefit scheduled at the Chicago Theatre with Ray Charles, also on the bill.

Taylor was hospitalized in late January and also missed a few concerts.

have very quietly started booking the second leg of their 2002-03 world tour with North American dates starting January 8 in Montreal. The itinerary includes one repeat market (Boston) from the fall 2002 leg. The preliminary itinerary is:

members of the Grateful Dead — Mickey Hart, Bill Kreutzmann, Phil Lesh and Bob Weir –posted the following message to its fans on their message board, vowing to perform together this summer:

We are gratefully overwhelmed by the support you have shown us, specifically the very direct support you demonstrated in your response to the two shows at Alpine Valley.

You will all understand that we and our promoter were dismayed by the decision made at the recent Walworth County Highway Committee meeting. We certainly appreciate the concerns of anyone who believes that 200,000 people might be coming, but such a number simply does not square with the 30 years of Dead history. That being said, we are currently looking at all the alternatives available to us to insure a safe and successful event. To that end, we are attempting to resolve the issues that were brought up at the hearing, as well as looking at other venues in the general region.

As always, we are committed to working with the communities we visit. We have never wanted to create a situation in which we, our fans, or the local area has a negative experience.

We intend to play together in public this summer. We thank you for your patience and understanding — we will work this out. As soon as the proper solution reveals itself, we will make our plans public. Honest, you'll be the first to know.

has secured 16 East Coast and Midwest dates on the Santana tour kicking off July 31 in Virginia Beach, VA and wrapping August 25 in St. Paul, MN.

This will not be Rusted Root’s first time out with Santana, but for lead singer/guitarist Michael Glabicki, co-founder of Rusted Root, this tour in particular, promises its share of surprises. "I expect to be up onstage with Santana and have him play three or four songs I've never heard, and he's gonna point to me about 30 seconds into each song and ask me to take a solo," Glabicki laughs. "Then he's going to walk offstage with a cigar and leave me there. Always with Carlos, it's a big, huge smile; that's what I love about playing with him."

returns to touring after a two-year absence, with a string of dates in the US, Canada and Japan, beginning August 1 in Salt Lake City.

In the midst of

their much talked about co-headlining tour, David Lee Roth and Sammy Hagar have tacked on a second leg of dates starting July 23 in Bossier City, LA and continuing through September 8 in Bakersfield, CA. The first leg kicked off May 29 in Cleveland, OH and wraps up June 29 in George, WA.

continues its 2002 tour this summer that will hit 40-plus dates in North America and feature Kid Rock and special guest Run D-MC. Clear Channel Entertainment's promotion and production kicks off in Holmdel, NJ on August 13 and runs through November with more dates to be announced.

Aerosmith's Steven Tyler: "I can't wait to get back on the road!! Loud guitars, screaming girls, diesel fuel and room service!! Forget about it!! What's not to love about that?!?!?"