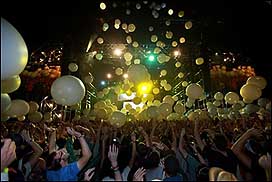 INDIO, CA (CelebrityAccess MediaWire) — More than 150 artists, including Arcade Fire, Kayne West and the Kings of Leon performed in the California desert at the Coachella Valley Music and Arts Festival as the summer festival season got off to a roaring start.

While AEG/Goldenvoice has yet to release any attendance figures, the event was sold out and crowd estimates for each day topped 75,000. However, there were few reports of the overcrowding that plagued last year's event, highlighting Goldenvoice's efforts to expand and improve the festival site.

Overall, the festival was reported to be fairly glitch-free, though the closing act for Friday night, the Chemical Brothers, didn't get started until well after midnight due to scheduling snafus. And Chilean band Los Bunkers didn't make the scene for their Sunday opening slot, leaving London-born pop singer Eliza Doolittle to take up the slack.

This year's festival drew praise for solid performances from a number of well-known acts such as Arcade Fire, Kanye West and Duran Duran, but also some lesser known acts, including The Kills, Death From Above 1979 and Sleigh Bells.

The festival was also recognized for their successful effort to "reinvent" the festival experience with enhanced multi-media offerings such as the art installations from the Creators Project. – CelebrityAccess Staff Writers